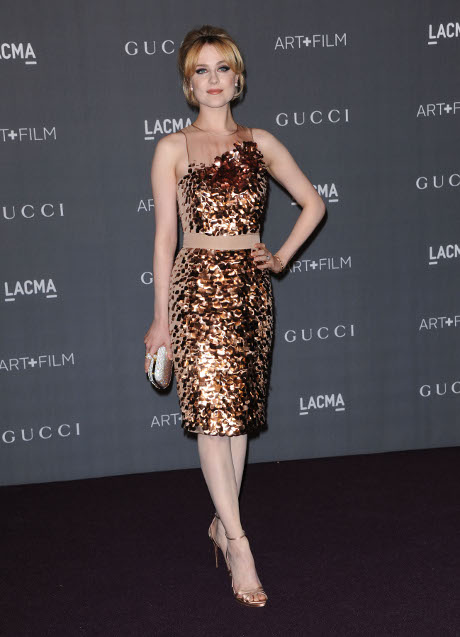 A new year means new mommies and it looks like Evan Rachel Wood will be joining the ranks later this year. The 25-year old actress confirmed today that she and new husband, Jamie Bell are indeed expecting a little one. Evan announced the good news on her Twitter page and posted a photo of her holding the pregnancy bible, What To Expect When You’re Expecting to go with it.

The couple pulled off one of the most hush-hush wedding ceremonies of the year last October 30th where Evan married her man in a stunning Carolina Herrera mermaid gown. While the wedding was top secret the couple actually goes back a ways. They originally met on the set of a Green Day video back in 2005 and have dated on and off ever since. One of those extended off times must have been when Evan was engaged to rocker Marilyn Manson.

Evan is known to like to shock people so I have to wonder how much of this pregnancy will be used to make people do a double take. She thought nothing of posting full video footage of getting her nose pierced! Hopefully she’ll keep the childbirth videos locked away just for her and Jamie to watch.

Are you a fan of Evan? She has really turned peoples opinions around over the last several years. Back in her Manson days she was kind of a young, creepy clinger and now Evan has turned into a formidable actress. The Mildred Pierce star has proven that she really does have some staying power in the movie industry.  Do you think she and Jamie are good for each other? They kind of fly below the radar a bit, do you think that helps their marriage in the long run? Tell us your thoughts in the comments below!