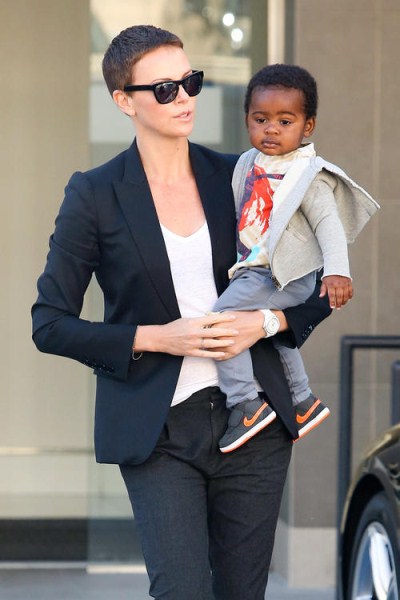 South African born beauty, Charlize Theron, was recently spotted out and about in the streets of Beverly Hills with her cute tot, Jackson Theron. In March of 2012, the actress shocked the world when she announced that she adopted Jackson in early 2012 and did a great job of hiding him from the cameras, fame, and publicity.

However, Charlize has been planning to adopt a baby for as long as she can remember. When she was only 8-years-old and living on the outskirts of Johannesburg, South Africa, she wrote a letter to her mom and expressed interest in adopting a baby from an orphanage. She recently opened up about this letter and said, “My mother foung [it]. It said, ‘Would you please take me to orphanage, so that I can go and adopt a baby?’ I always knew I would adopt – always.”

Charlize, with her short buzz cut, was recently in South Africa – her home country – with Jackson and her mom, Gerda Theron, while shooting Mad Max: Fury Road. After the principal photography wrapped in Namibia, Charlize and her family went on a whirlwind vacation to Cape Town, South Africa. They were spotted at the most famous restaurants and hotels in South Africa, sipping on drinks, eating amazing food, and having a wonderful time. When fans approached the actress and her family, she was always more than willing to hand out autographs, take pictures, and share special conversations with her adoring admirers.

There’s no denying that Charlize is an absolutely stunning actress with the cutest kid this side of fuzzy kittens. We cannot be happier for her! What do you think Celeb Baby Laundry readers? Do you like Charlize Theron? Do you also think Jackson is one of the cutest babes in the world? Let us know your thoughts in the comments below.