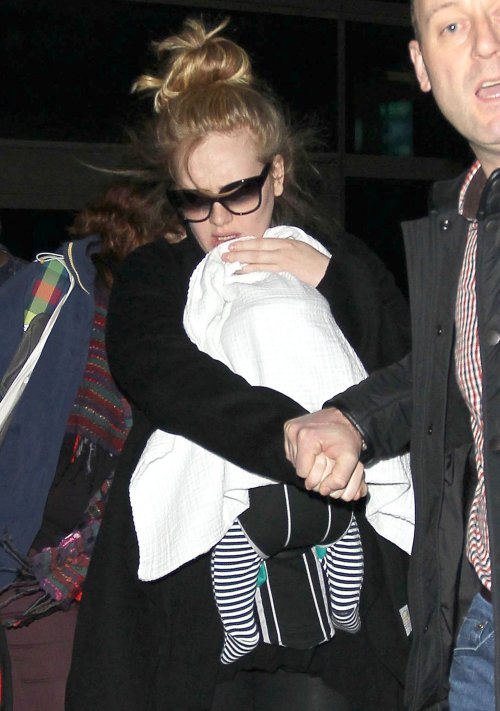 Already iconic songstress Adele has been able to pull off quite a coup by keeping her baby son completely under wraps since his birth in October. It probably helps that she lives in a castle in the backwoods of England on over 25 secluded acres. I guess if you’re not headed out to Starbucks every day, it’s easy to avoid the paparazzi. But really, most A-listers are not avoiding, they’re just looking for the perfect photo op.

But Adele has been able to maintain quite a bit of privacy throughout her pregnancy and after the birth of her son. We still don’t know his name – hell we don’t even know his last name. Did she give her little offspring her last name – Adkins – or her fiancee Simon Konecki‘s moniker? Here’s what we also don’t know – what time he was born, how much he weighed, anything!

At long last, we have a photo of Adele’s baby. Okay, let’s be honest. We have a photo of the black striped onesie-clad legs of her son while he’s strapped into a Baby Bjorn on his mom’s front with a baby blanket covering his head and torso. As photo ops go, it’s not much, but it is something! I can’t imagine she would every do anything so crass as sell her baby photos and as much as I would like to see a glimpse of her little munchkin, but Rumor Has It she’s not going to give us a peek if she can help it.

Adele announced she was pregnant via her website saying, “I’ve got some news. Im delighted to announce that Simon and I are expecting our first child together. I wanted you to hear the news direct from me, obviously we’re over the moon and very excited but please respect our privacy at this precious time. Yours always, Adele xx”

That was the last we heard from Adele about her gestation and subsequent hatching. But now at least we have visual confirmation that she seems to have given birth to a tiny zebra. Congrats!