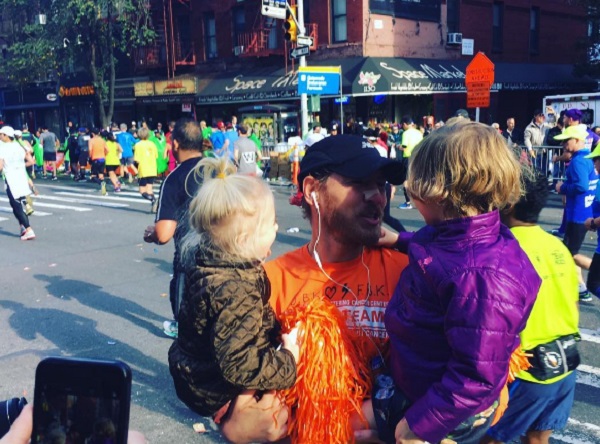 Drew Barrymore popped up in New York City on Sunday November 6th to cheer on her ex Will Kopelman in the NYC marathon.  Drew brought along their two daughters Frankie and Olive to cheer their dad on and watch him cross the finish line, afterwards the family posed for some photos together, which Drew proudly posted on Instagram.

As Will Kopelman crossed the finish line, Drew Barrymore made sure that 4 year old Olive and 2 year old Frankie were there to congratulate him.  In early 2016, Barrymore confirmed that she and Will had split up, and the couple’s divorce was finalized in August 2016.  However, Drew vowed that she wasn’t going to let their break-up get in the way of co-parenting their two adorable daughters, and it looks like she is a woman of her word.

Drew Barrymore recently spoke out about her split from Will and how it would affect their families’ holidays this year in an interview.  Drew explained that they won’t be taking their regular holiday pilgrimage to Idaho, but they did have some “adventures” planned for the kids.  The actress gushed to E! News that she still considers Will Kopelman a part of her family and added, “We are a family.  We’re actually blood related. My friends are my family my whole life…they’re my family. Will’s family is my family, and my daughters are my family. I never thought I’d be so lucky to have so many families!”

It looks like the Barrymore-Kopelman clan had a blast at the NYC Marathon, and it was certainly sweet of Drew to bring along some personal cheerleaders for Will!