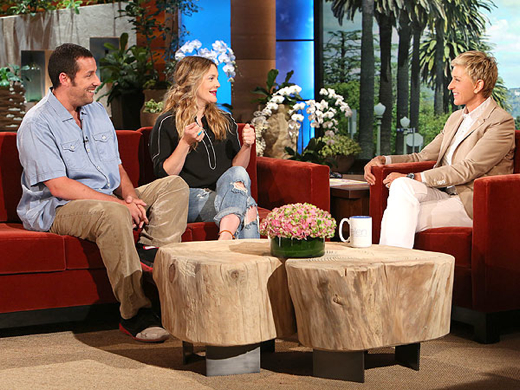 Drew Barrymore is loving being a mom of two!

While making an appearance on The Ellen DeGeneres Show to promote her new movie Blended alongside Adam Sandler, Barrymore gushed about being a mom.

“I feel so good and happy,” Barrymore, who welcomed her second daughter, Frankie, on April 22.“My kid is healthy. I have nothing to complain about. I’m so blessed.”

Her 19-month-old daughter Olive is adjusting well to being a big sister.

“She really gets that she has a sister and she says, ‘Frankie, sister,’” Barrymore explains. “And she loves playingwith her and she’s not mad about it at all yet. She’s all positive at this moment.”

Barrymore also revealed how she and husband Will Kopelman chose Frankie’s name.

“It was just a name that came to my husband and I a few months before she was born, and we were sort of like, ‘I think this is it,’” she says. “And then we gave ourselves room to change our mind, but we never did. My mother-in-law’s maiden name is Franco and I love her so much that it reminds me of her as well.”