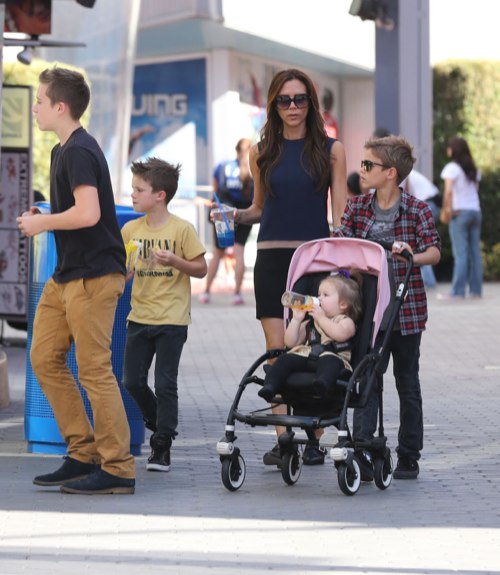 Victoria Beckham stepped out with her four children Brooklyn, Romeo, Cruz and Harper in Universal City, California on Sunday. They were pictured enjoy a stroll around Universal City Walk while enjoying some snacks. Later they headed inside, to watch Cruz take part in some indoor skydiving.

The singer and her football star husband David Beckham are said to be moving their family to New York City.

“Talks have begun about the next step for the family and New York is one of the options being talked about seriously,” a source close the couple revealed.

The family first moved to Los Angeles after David landed a lucrative contract with football team LA Galaxy. However, with the contract coming to an end in December, the family are now looking forward to the future.

“LA has given the family the outdoors lifestyle that they’ve loved for five years. But now the children are getting older and the couple both look to the future in their respective careers,” the source added.

Moving to New York City would make a lot of sense for both of Victoria and David’s careers. Victoria has sucessfully moved from singer to designer. Additionally, David is said to be venturing into sports commentating with Time Warner.