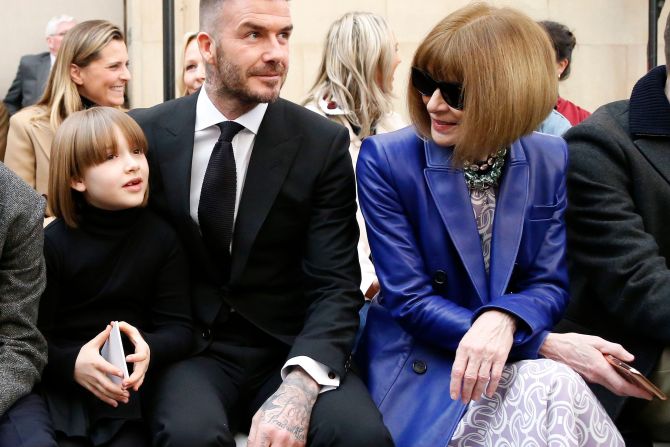 It looks like a lot of people had to do a double take at Victoria Beckham’s runway show this past week. That’s because the designer’s 7-year-old daughter Harper Beckham looked exactly like Vogue editor and fashion maven Anna Wintour thanks to her brand-new haircut.

This past weekend Anna Wintour sat in the front row alongside Victoria Beckham’s family members which included David, 43, Brooklyn, 19, Romeo, 16, Cruz, 13, and Harper, 7. While proud husband David snapped took pictures during Victoria’s show, it was Harper that got all of the attention with her new haircut: an iconic Anna Wintour bob with matching bangs. David even shared a photo of Harper and Anna from the back, and yes, we can’t tell who is who! “Harper & Anna, who wore it better,” he wrote.

And while a lot of people seemed to either love or hate the look, according to one insider close to the Beckham family, little Harper loves her new haircut. One source told OK! Magazine,

“Actually Harper loves her bangs. She really likes the cut and helped pick it herself.”

Plus, if Harper is happy with her hair, that’s all that really matters, right? There’s also no denying that she is one of the cutest celebrity tots in the entertainment world. Tell us, what do you think of Harper Beckham’s Anna Wintour-inspired hair cut? While there’s no doubt that she looks cute with or without bangs, we love seeing her as a mini-fashionista! Of course, there’s always the possibility that she might end up walking in Anna’s (and Victoria’s) footsteps by working in the fashion world one day herself. Fingers crossed!

In the meantime, drop us a line with your thoughts in our comments section below. And as always, come back to Celeb Baby Laundry for all the latest news and updates on Victoria Beckham, Harper Beckham and all of your favorite celebrity parents and tots right here!