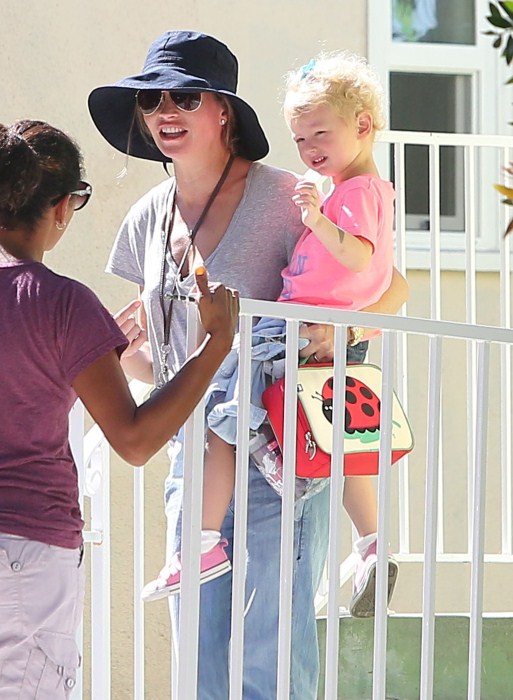 Rebecca Gayheart was spotted picking up her daughter Billie from school in Los Angeles, CA on Tuesday. The actress wore a loose fitting grey top with jeans that she paired with a floppy hat and aviator sunglasses while carrying her little tot.   Billie looked cute in a pink shirt, jean shorts and pink Converse sneakers.

Gayheart and her husband Eric Dane are suing their neighbor Smashing Pumpkins front man, Billy Corgan. The couple are alleging that a eucalyptus tree at Corgan’s Beverly Hills residence caused significant damage to their home during a November 2011 windstorm.

The complaint alleges that the tree took out power lines and broke a high-pressure fire sprinkler, causing the Dane residence to flood. Rebecca, home alone and nine months pregnant, was forced to flee her flooding home with her 20-month-old daughter in tow, navigating a flooding property that was surrounded by high-voltage wires — in the dark, since the power was knocked out..

“Despite his knowledge of the incident and the significant damage it has caused to the Dane dwelling, Corgan has failed to show any remorse, to reach out to the Danes in any way, to make restitution for the significant damages he caused, or take any measures to remove the remaining improperly maintained and/or rotten eucalyptus trees from the Corgan property,” the suit reads.

They are seeking unspecified damages, interest, attorney’s fees and the costs of bringing the suit.