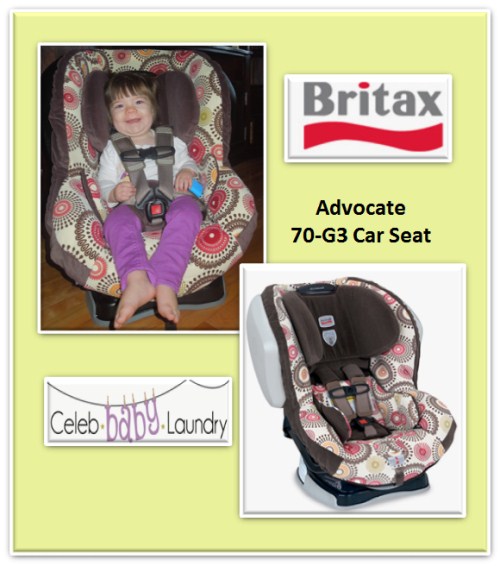 My 15-month-old daughter Ava has been a Britax baby since she was born.

We started out with the infant car seat, the Chaperone and recently upgraded to the Advocate because the infant seat had become too small. I chose to stay with Britax because my husband and I were very pleased by its superior safety, sleek design and easy installation.

I really believe Britax is the best car seat brand on the market.  We have traveled across Europe and Canada with a rental car and have had to use the car seat the rental company provided. Lets just say we couldn’t even figure out how to install the car seats. We almost felt like it was pointless because of the lack of durability and poor safety design compared to our Britax.  I guess we are spoiled!

Hugs Safe Cell Technology – are affixed to the seat shell to ensure proper positioning while SafeCells compress to manage energy and provide resistance to the forward movement of your chid in a crash, reducing the risk of head injury

Side Impact Protection – is deep side walls with energy-absorbing EPP foam along with a head restraint which offers a double layer of EPP foam to distribute crash forces, shield from vehicle intrusion, and contain the head, neck and body while keeping them “in true” or aligned

Base With Safe Cell Technology – features SafeCells designed to compress in a crash, significantly lowering the center of gravity and counteracting the forward rotation of the child seat which normally propels the child toward the front seat

Energy Absorbing Versa-Tether – features a staged-release tether webbing to slow the forward movement, reducing the crash forces reaching the child, and a two-point attachment to minimize forward rotation while anchoring the top of the child seat

Besides the safety features on the Advocate, I love how easy this car seat is to install.  Installation is straight forward and even the most car seat challenged parent can figure out how to install the Advocate.  We own a 2door Pontiac G5 and the Advocate fits perfectly forward facing with our daughter. We use the premium latch connectors that feature a push button for easy release. I love how the latch system tightly holds the car seat to the seat.

Britax has been using the five point harness since 1996.  It  is comprised of straps or webbing that extend over your child’s hips, shoulders/collar bones, and between their legs. I love the five point harness because they are much safer than normal harnesses. Britax has attached their Safe Cell Technology to each side of the harness that rests over your child’s chest. It adds another level of safety to the harness that is simply absent from other brands.

All the adjustable areas on the Britax are easy to adjust. This is one of the biggest things that annoys me about other car seats. When I had to use a car seat that was not made by Britax I felt like I needed a car seat PHD to adjust the harness, the head rest, etc.  Adding to the ease and to the simplicity of adjustment of the Advocate harness, Britax has also added the snap and click technology, so you know exactly when the harness is snug enough for your tot.

Providing the best safety to your child is Britax’s main concern, but they also take many steps to add style and small features to their car seats.  The Advocate comes in five different stylish fabrics. I chose Anna as it is the most girly and my little Ava is a girly girl!  The fabric not only looks good, but it is so soft that I understand why Ava has no trouble falling asleep when we put her in it. There is a removable fabric pad that snugly fits around your child and can be removed as the child grows bigger. I also like that there is a foam padding under the seat fabric that adds just a little more comfort to the seat.

The fabric cover is also easy to remove in case of spills or other accidents.

The price of a Britax Advocate model does run higher than many other car seat brands. However, unlike many other brands on the market the Advocate is not priced higher because of its “trendiness”, but the safety it ensures each time you put your child in it. Since the Advocate is a convertible car seat, it can grow with your child from birth to the time she/he reaches 70 pounds. So, if carrying your baby in an infant seat is not that important than the Advocate is a really great investment from the time of birth.

If you can afford the Advocate I see absolutely no reason why it would not be your first chose car seat!

You can learn more about Britax at britaxusa.com