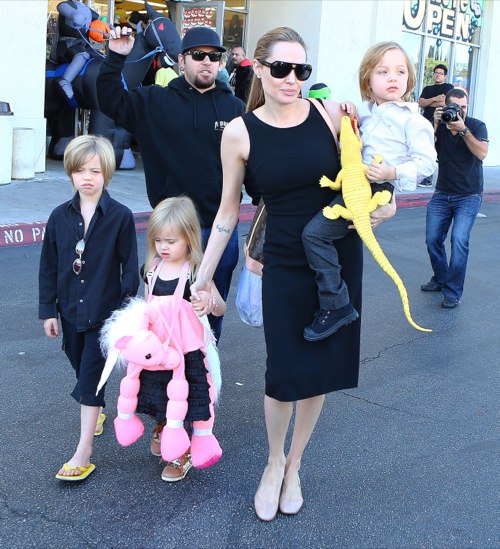 Angelina Jolie was spotted taking her children Shiloh, Knox and Vivienne out shopping for Halloween costumes at the Halloween Super Store in Sherman Oaks, Ca on Sunday.

The actress wore a black dress with skin colored flats as she protectively carried Knox and held the hand of his twin sister Vivienne as they left the store. Vivienne carried a unicorn purse around her neck while Knox carried an alligator that they had got from the store. Shiloh walked besides her sister while giving the paparazzi a look of death.

Their bodyguard followed behind with a big bag of Halloween decorations.

It was announced recently, that Jolie’s children Pax and Zahara Jolie-Pitt will play small parts in her next feature film Maleficent. They will join Vivienne, who is playing the young version of Princess Aurora (Elle Fanning).