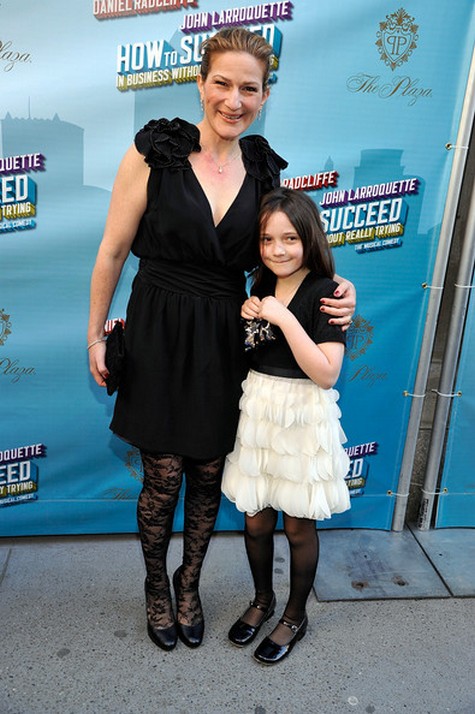 Ana Gasteyer scored the role of a lifetime in Suburgatory, the ABC comedy about a teenage girl who moves from the city to the suburbs. Gasteyer stars as Sheila Shay, the mom in the series. However, for Wednesday’s episode of Surbugatory, the producers required a younger version of Sheila Shay, so they decided on none other than Gasteyer’s 10-year-old daughter, Frances. “[Executive producer] Emily [Kapnek] just reached out to me. She knew [my daughter] Frances loves theater and acting,” Gasteyer told People magazine.

The Halloween episode on Wednesday will see Frances make her onscreen debut portraying Sheila Shay in flashbacks that depict her rivalry with Paula. According to Gasteyer, Frances took this experience as an actress on her mother’s television show very seriously. “She really loved all of it. I was amazed. She highlighted her line and she really delivered at read-through; she was very focused in terms of her blocking and hitting her mark, all of the technical parts of it,” Gasteyer admitted. Unfortunately, Gasteyer missed the beginning of her daughter’s first scene, but arrived just in time to hear the producers praise her daughter. According to Gasteyer, “She had a lot of action for a first job. She had a Steadicam shot. It’s so pathetic that even as an experienced, seasoned actor, walking and chewing gum is still incredibly hard for me. So if I’m not just sitting and saying my lines, I get overwhelmed, and she did so much of that and she did incredibly well.” Like mother, like daughter.

Frances wrapped up her shoot on the set of Surburgatory and returned to normal life by designing her own costume for the upcoming Halloween celebrations. “Frances is really into costumes and costume design. She’s taking costume design at school. She’s started drawings of a zombie princess that she wants to be,” Gasteyer said. Well, if all else fails, Frances could take up costume design in Hollywood. Obviously, with her mother’s connections, she is set for life when it comes to the entertainment business.