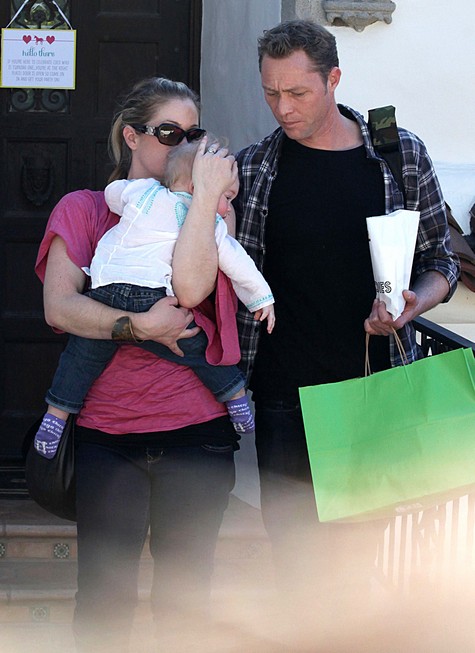 Christina Applegate is best known for playing Kelly Bundy on the smash hit situational comedy of the 90’s, Married With Children, but she is perhaps more famous for being a loving mother and a doting fiancée. Applegate admitted to More magazine’s November issue that her love life seemed to have a life of its own, and happened when it happened.

“We had always cared deeply for one another when we were friends. He came and put me under his wing. That was it – he was supposed to come,” Applegate told the magazine. She was of course referring to her musician husband, Martyn LeNoble, a film and television composer who worked with a string of famous artists, including Jane’s Addiction, The Cult, and Soulsavers.  In 2011, the loving coupled welcomed their daughter, Sadie Grace, into the world. According to Applegate, the couple is taking a long journey through the terrible twos. “We don’t know the best thing to do. She’s starting to get really defiant when we say no and look back at us with an evil look in her eye,” Applegate confessed to the magazine. Ah, the two year mark, when many a baby plans to take over the world, one giggle at a time.

Applegate wants to add a sibling or two to Sadie’s playpen, but according to her, “Because of some things that happened during my pregnancy, I don’t know.”  Applegate survived breast cancer in 2008 and underwent a double mastectomy, even though the cancer was only prevalent in one breast. During the time of her diagnosis, she said in an interview, “I was just shaking and then also immediately, I had to go into ‘take-care-of-business-mode’ which included a change to a more healthy diet.” Her mother, Nancy Priddy, is also a breast cancer survivor.

The courageous Applegate need not worry about the terrible twos, because a baby with a plan will take down any man.