Jessica Simpson just revealed her fabulous weight loss on “Katie,” where she also revealed Maxwell Drew in a bikini. People are to talking about how amazing Jess looks, or how much weight she lost, but instead are lashing out at her for putting her four month old in a teeny bikini. 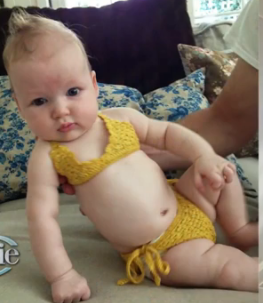 Now, I am not sure where I stand on this. I have two little boys, so thankfully I don’t have to worry about it! Little Maxwell Drew was all dolled up and looking cute in her little yellow bikini. It is a crocheted piece, so probably not best for swimming. Jessica siad it was her daughters first bikini and shared the photo proudly. She obviously thought nothing of it.

Well, the world just isn’t that innocent. She is now getting backlash from people who say that it over sexualizes her daughter, that it is completely inappropriate. One commenter wrote,

“Sharing pictures of your baby in a bikini with three million TV viewers, as Jessica did when she appeared on an American chat show? That is nothing short of inexcusable.”

“I just think that is a little ridiculous that you would put that on your child. It gives people the wrong idea too quickly.”

I just find it sad. She is innocent and I am sure Jess thought it was simply cute, and it is. It is a sad day when you can over sexualize a baby. I get it – there are pervs out there and I am not sure I would be comfortable in doing the same with my daughter, but I am tired of the judgmental parenting!

What do you think about Maxwell Drew’s bikini photo?