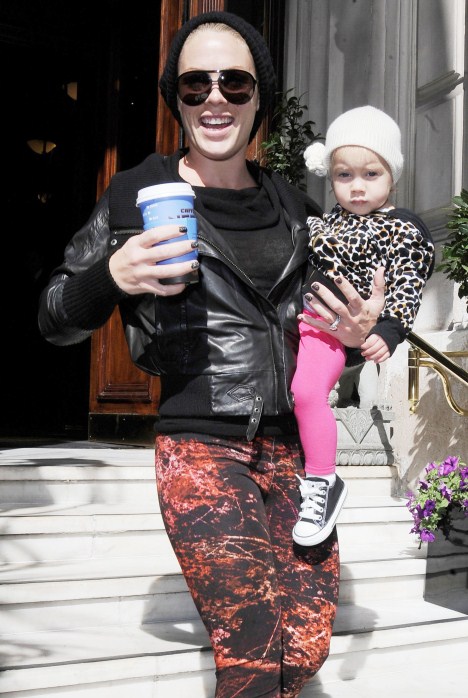 Pink was spotted leaving her hotel while carrying 1-year-old daughter Willow in London, England on Thursday. The mother-daughter duo who were in Paris at the beginning of the week were headed for a stroll through Hyde Park. Pink wore a black jacket over a sweater that she paired with paint splattered looking leggings. Willow wore bright pink leggings, a leopard print jacket and white hat.

In a interview with the Herald Sun, Pink admits she has realized her music is not exactly child-friendly after becoming a mother.

The singer admits her record company always tries to get her to re-record more family friendly versions of her tracks.

When she goes on tour, Pink also joked she’ll be getting her baby to fit in with her own party-heavy schedule.

”When you’re in my world you’re going to bed at 2am. So is Willow! Now she’ll go to bed at nine so she can sleep through until at least 7am. Well, that’s the plan!”