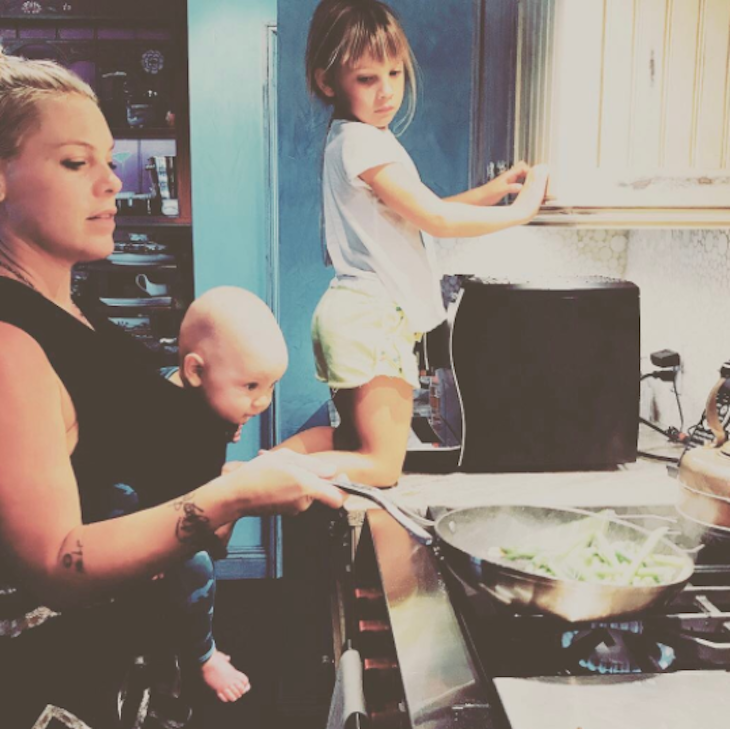 There’s no denying that Pink is a multi-tasker. The chart topper and celebrity mother shared a new photo of her cooking in the kitchen with her two children, Willow and Jameson, nearby. The singer appears to be frying vegetables on her stove while carrying her son Jameson in a sling. Her daughter Willow, meanwhile, is perched on the kitchen counter next to them.

And while many of Pink’s social media followers expressed safety concerns over seeing her children so close to the stove while she’s cooking, others defended her. One Instagram fan wrote, “I have a 17 year old, 15 year old and 5 year old and I held all of them while I cooked, cleaned, shopped, chopped, and changed oil on my old car. All three of my kids survived!”

Of course, Pink is no stranger to controversy. Back in 2015, The ‘Family Portrait’ singer explained how becoming a mother has given her a new lease on life. She says that she’s more focused on the things that matter to her the most – and that’s her family.

She told People Magazine in an interview, “I have lived a lot of life in a very short time, and you get hardened a little bit — you get jaded, you build up walls. And when you see this little kid, and you get to watch them through infancy to toddler to little person, it’s amazing.”

The singer, who is married to Carey Hart, added that motherhood has been very healing for her, too. She says that being a mother has helped her focus on what’s important in life, which of course is her husband Carey and their two children.

She explained, “You see how you were. When you watch this bundle full of love and light that’s untarnished and untainted by heartache and any of the numerous things that change you, it’s very healing. It’s a miracle.”