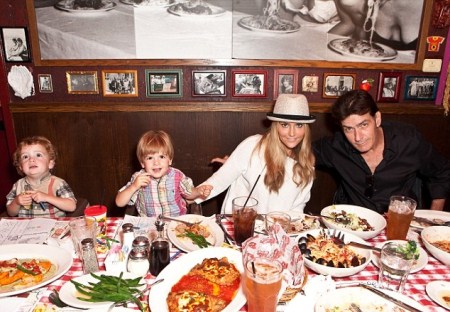 Charlie Sheen is planning to look after his twin sons, Bob and Max following the arrest of his ex-wife Brooke Mueller. Mueller’s parents will also help Sheen take care of the boys.

Charlie and her parents want her to enter rehab to get help for her troubles while they care for the boys. However, Brooke is refusing treatment as she doesn’t want to be away from her children.

Mueller’s friends insist she needs to be in rehab for “at least nine months” and has reportedly been told spending anything less inside a treatment facility would be a “total waste”.

“Brooke is calling the shots, and not listening to herÂ family, or medical professionals that are telling her she needs to be at an in-patient facility for at least nine months, and not as a day patient, as she has done in the past.”

A source close to Mueller claims 30 days isn’t enough for an addict like Mueller.

“Anything less than nine months is a disservice to Brooke, and frankly, is a total waste.”

It is thought Charlie posted the $11,000 bond for Brooke’s bail after her parents refused to help her. She must return to a District Court hearing on December 19. Mueller could face up to six years in jail after being charged with assault and intent to distribute drugs.

Alanis Morissette Wants Son To Have His Own Thoughts