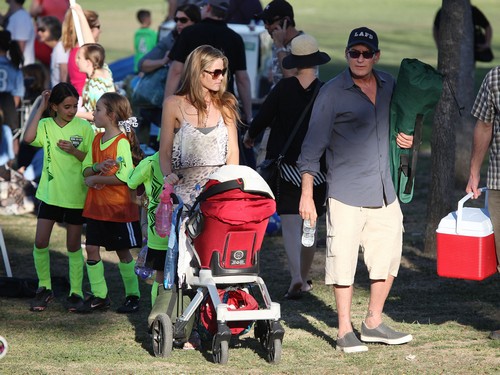 Denise Richards and Charlie Sheen have a really complicated relationship nowadays and by complicated I mean- healthy. Somehow they recovered from years of issues and have gotten to the point where they can be friends, not just for the sake of the kids, but because they really like each other.  I guess with that relationship in place it almost made sense that Denise would be willing to raise Charlie’s sons with ex-wife, Brooke Mueller.

Brooke is even more of a train wreck than Charlie and a few weeks ago she was ushered off for her 20th rehab stint. Child Protective Service’s rushed in and decided that her 4-year old twins were not living in safe conditions. Rather than Charlie take the boys, he called and asked Denise to do it. Charlie has never gone after custody of the boys because he admits he’s not the best hands on father. Denise was more than willing to take the kids to her house, for the second time in 6 months. She recently told US Magazine,

“You just figure it out because you don’t have a choice. You have these children depending on you. You prioritize. I had children because I want to be a parent, and I want to be there for them.”

Denise is supposedly now hoping to retain full custody of the twins so that they can be raised right alongside of their half sisters. It takes a pretty amazing mom to willingly raise 5 kids on her own, don’t you think?  Denise also doesn’t seem to think of it as an obligation either. Do you think that the kids are better off in her capable hands for the long run? Tell us your thoughts in the comments below!

Anna Faris: It Makes Me Crazy When I’m Not Holding Jack