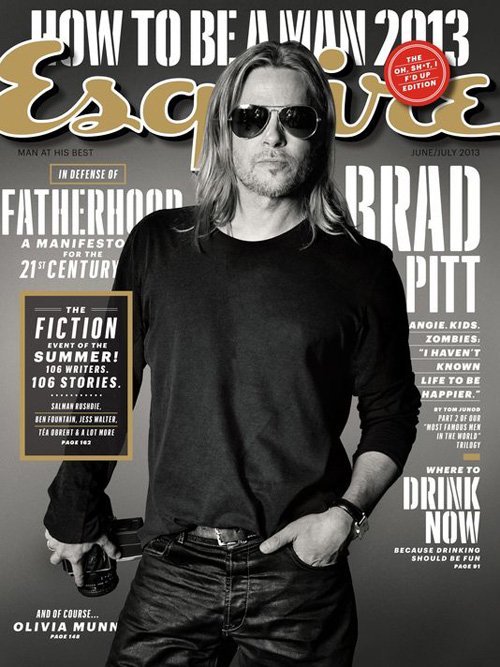 Looking sexy as ever on the June/July issue of Esquire magazine, Brad Pitt opens up about his life with fiance Angelina Jolie and their six children – Maddox, 11, Pax, 9, Zahara, 8, Shiloh, 6, and twins Knox and Vivienne, 4.

The friends that Pitt does have can see how devoted the actor is to Angie and their kids.

“Once I walked in and Angie was standing there and Zahara walked up and said, ‘Daddy, you’re not going to start making out with Mommy again, are you?’ And it’s like that. This is a guy who has tried not to do any sexy scenes with other women since he’s met Angelina. He’s crazy about her, and she’s the same way about him,” Frank Pollaro, a friend of Pitt tells. “No matter how hard he’s working, if one of those kids runs by the window he’ll get out of his chair and give them a kiss. And I don’t think I’ve ever seen Angie without one of those children in her arms.”

The Fight Club star adds that he made a conscious decision about ten years ago to change and stop wasting his life away.

“For a long time I thought I did too much damage — drug damage. I was a bit of a drifter . . . I spent years f–king off. But then I got burnt out and felt that I was wasting my opportunity. It was a conscious change,” Pitt explains. “This was about a decade ago. It was an epiphany — a decision not to squander my opportunities. It was a feeling of get up. Because otherwise, what’s the point?”

The June/July issue of Esquire hits newsstands May 31.

January Jones Staying Mum on The Identity of Xander’s Father