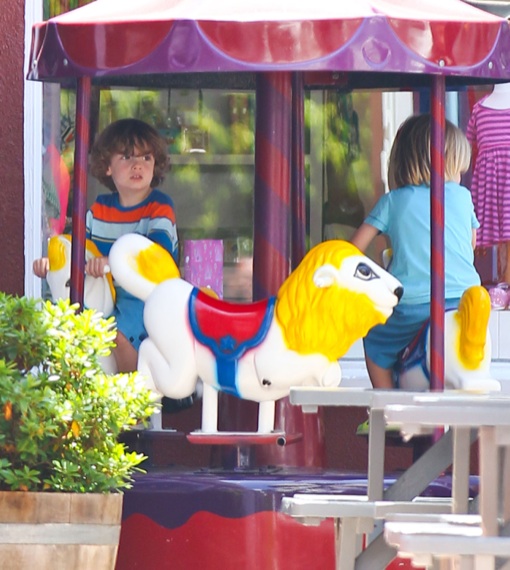 Denise Richards, her daughter Eloise were spotted out with Charlie Sheen‘s twins Max and Bob shopping at the Brentwood Country Mart in Brentwood, CA on Tuesday (June 18).

Recently awarded temporary custody of Charlie’s children with Brooke Mueller, the devoted mom took all three of the youngsters to a toy store to pick up some toys. After, the twins enjoyed a merry-go-round ride. Meanwhile, things are chaotic as ever in Charlie’s life.

His co-star Selma Blair was fired from Anger Management after he found out she had went to their bosses to complain about his lateness to set. Apparently, the former Two and a Half star demanded she be fired or he would quit the show.

“We are confirming that Selma Blair will not be returning to Anger Management and we wish her the very best,” studio Lionsgate Television said in a statement Tuesday.

Things aren’t going any better for Brooke either. Media sources claim she quit Betty Ford clinic because it was ‘too hard’ for her.

“Brooke didn’t tell anyone, including her lawyer, that she had left Betty Ford,” an insider close to the situation told RadarOnline. “Brooke hated Betty Ford because she was required to do daily chores, which she resented. She complained that Betty Ford was just too hard. Betty Ford is hardcore and Brooke just doesn’t respond well in situations where she can’t call the shots.”

She is now staying at at a clinic in San Juan Capistrano, CA.