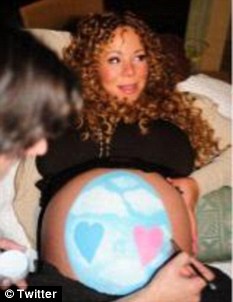 Mariah Carey, 42, has given birth to her twins this morning.  They are not only celebrating their wedding anniversary today but Mariah and Nick Cannon became parents to a  twin boy and girl today.  Mariah’s representative confirmed the birth to the Associated Press: “The singing superstar gave birth Saturday at 12:07 p.m. EDT at an undisclosed hospital in Los Angeles. Berger says the baby girl was born first, weighing 5 pounds, 3 ounces, and was 18 inches long; her brother was next, at 5 pounds 6 ounces, and was 19 inches.”

The twins have not been named yet.  Because Mariah has had false labour before they thought it might be false labour again so Nick drove her to the hospital himself.  Mariah’s twitter also confirms the birth “Congratulations! Mariah & Nick celebrate their fourth anniversary by becoming parents to a baby girl & boy.”

They have nurseries in both New York City and Los Angeles since they plan to live between both states.  Congrats to Mariah and Nick!