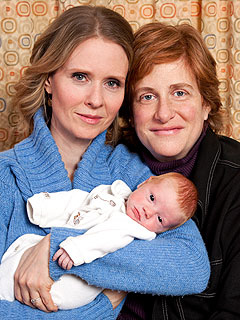 Sex and the City Cynthia Nixon, 44, and her partner Christine Marinoni,43 introduces their new son to the world.  Their son Max was born February 7th, 2011 and the photo was taken in New York City February 11th, 2011 just five days after he was born.

The two have been together since 2004 and got engaged in 2009.  Congrats to Cynthia and Chrisine on their new son!