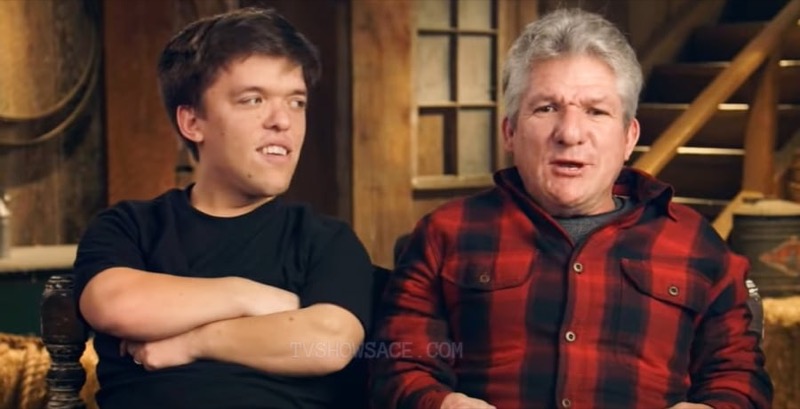 Little people, Big World (LPBW) fans know that not that long ago, everything seemed to be bliss and respect between Matt and Zach and Caryn and Tori Roloff. TLC fans saw that Caryn took to little Jackson and he spent a lot of time in her company. At one stage,  fans saw that  Zach and Tori were keen on moving into Amy’s old house on the farm. However, that never happened. Then, all of a sudden Zach and Tori relocated to Washington, and the new trailer for the upcoming season reveals a blowout between Zach and his dad that centered on Matt’s decision about the farm.

For a long, time, every time folks tuned in to watch the TLC show, Matt and Amy were at loggerheads over the future of the farm. Finally, he bought her out, as far as fans could make out and she moved into town. Meanwhile, to this day Audrey Roloff seems unhappy because Matt wouldn’t allow Jeremy to take over or buy the land. Well, fans always thought that probably, Zach would take over, as he worked on the farm long after Jacob and Jeremy went their own way. Now, it looks like the farm and Zach’s aspirations are history.

Before Isabel gave birth to Jacob’s first child, Matt hinted to Alec Lace of First Class Fatherhood, that he’d like to see Jacob farm “a corner” of the land. At the time, LPBW fans knew that Jacob still worked in Bend for someone else. Well, sure enough, he started showing up at the farm much more. So, many people think that Tori and Zach were sidelined for his younger brother. On social media, a lot of people suspect that Caryn Chandler lies behind Matt’s decision not to let any of the family get the farm. Whatever his plans are, in a teaser for the new season, Amy looked horrified and walked out.

LPBW – Zach And Tori On The Farm Discussed For Months

While things looked hunky-dory on the face of it, critics on Reddit talked about Jeremy and Audrey and Zach and Tori and the future of the farm. In the current teaser, Matt said, “I’ve got this new plan” for the “north side of the farm.” Well, Caryn looked very into that part of his decision. And, it seems that Matt doesn’t care what anyone else feels about it. He added. “if the kids decide they want to hate me for this, then there’s nothing I can do about it.” Well, as you can see below, it all seems like a trainwreck of a mess.

Many LPBW fans seem to think that the farm’s ownership and future have been done to death on the show. Meanwhile, others feel sad that Tori felt uncomfortable around Matt and Caryn. Zach described a meetup with Matt as full of “tension.” Perhaps it’s all for the best that the couple took their kids and moved away from the farm, out of state, and far away from Caryn’s opinions on their old home ground. Enough came on social media or one fan to accurately predict four months ago on Reddit. “[Farm ownership is] probably the narrative for next season.”

TLC Fans Want A Spinoff For Zach And Tori

LPBW fans grow weary of the internal issues about the farm. They also grow weary of Matt and Amy still bickering, and Caryn and Amy still at odds with each other. For a long time now, fans have wanted to see a spinoff with just Tori, Zach, Jackson, Lilah, and the new baby. As they are no longer part of the farm deal, what’s to stop TLC from giving them their own show? After all, fans agree that Jackson steals the show anyway.