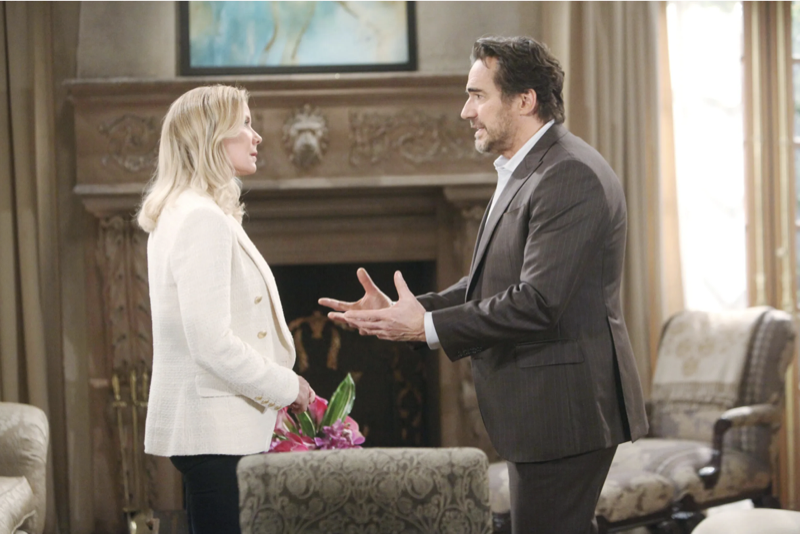 The Bold and the Beautiful (B&B) spoilers document that Ridge Forrester (Thorsten Kaye) stepped over the marital boundary line. As he said, Ridge was not asking Hope Spencer (Annika Noelle) to leave the property. He was conditionally telling her.

There is no ill will intended toward Hope. Ridge cares about Hope. But he decided that if she wants to be connected to Deacon Sharpe (Sean Kanan), then a consequence would be created.

B&B fans see what is coming. Brooke Logan Forrester (Katherine Kelly Lang) naturally learns what Ridge did, calls him on it, and then another Bridge impasse is reached.

Bold And The Beautiful Spoilers – Deacon Sharpe Is Pushing Boundaries

Deacon went to Brooke’s main house. He waited until Ridge left to avoid a confrontation.

However, Deacon also waited until Brooke was alone because he wanted to talk with her about their intimate past. The scandalous storyline, where Bridget Forrester Sharpe (as now played by Ashley Jones) learned that Brooke and Deacon were together was referenced by Kanan’s character.

The choice to jump over the terrible pain they caused Bridget and instead to focus on the intensity of the connection that led to Hope’s birth was emotionally underhanded.

Bold And The Beautiful Spoilers – Meanwhile, Over At The Cabin

The comparative scenes that viewers saw were intriguing. As Deacon was trying to get Brooke to admit how great Beacon was years ago, Ridge was issuing what was a legitimate ultimatum to Hope.

Ridge has every right to feel that Deacon’s presence on Brooke’s property is a threat to Bridge and the Forrester and Spencer families. Hope disagrees, while also realizing that she gave her mom an ultimatum in the recent past when threatening to move out.

Having Deacon go to the cabin after his pointed talk with Brooke was great soap. He eavesdropped, learning about Ridge’s demand.

Bold And The Beautiful Spoilers – Coming Up Next On B&B

Taylor Hayes’ (Krista Allen) name has been mentioned a handful of times in recent weeks. That is intentional, as readers of this site know the character is being reprised with the recast of Allen.

So, Ridge and Brooke will be at odds, whether Hope leaves or stays. Deacon just received Brooke’s blessing to be on the property to see Hope.

Lang’s character could always change her mind and tell Deacon that he is banned. But doing so would put her at odds with Hope.

The created conflicts and Taylor’s imminent arrival, which is set for December 10, represent compelling drama that will not be easily resolved.