Christmas is just around the corner, but Andy Cohen seems lacking in the spirit of the season. Maybe it eludes him now, but his son Ben seems so excited, the actual day probably brings some smiles to the host of Bravo’s Real Housewives. Actually, the Watch What Happens Live star seems very lucky that Santa visits his home this year, as Christmas can be a very lonely time for many people.

Ben turns three years old in February, which means he’s at the perfect age to appreciate the festive season. At one year old, the festivities seem to sail right over the heads of little kids. Then at two, they seem to enjoy their presents. But at three, the magic of Santa and the gifts really seems to click with little kids. Fans know that Ben is likely to enjoy a really nice Christmas. Real Housewives fans often praise Andy for the way he raises his son. They see a bright and well-loved child and the Bravo host never lost the wonder of being a dad.

Andy Cohen often takes Ben out for walks in New York, and the cute little kid really knows how to rock his style. He might look like a miniature teen, but when it comes to Christmas, he’s every inch a toddler. How can Andy possibly remain unaffected by his cute little boy who seemed way excited about a playschool Christmas party? Well, the Bravo host seems torn between boredom and vicarious excitement for his son this year.

Late on December 22, The Real Housewives host took to Instagram and told his fans that he feels so bored. He said, “Guys, it’s a fireside chat.” Then, he noted that there wasn’t a fire, so he made do with chatting next to the Christmas tree. Probably, Ben was already asleep. So, he twiddled his thumbs and thought about how bored he felt. Andy held a cocktail and looked rather glum. Then he told his fans, “Truth of the matter is, I’m bored.” So, he wondered what was going on with his fans and friends on Instagram. He added, “It’s limbo-land in New York City.” 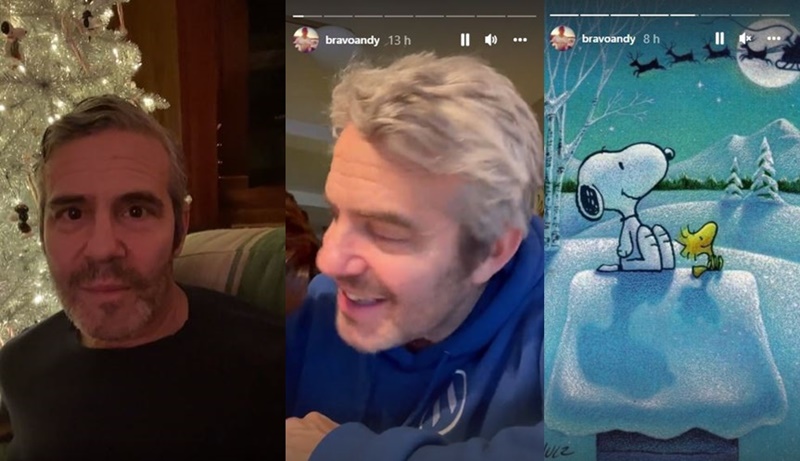 Earlier, Andy Cohen shared some Stories on Instagram, and at the time, he seemed in a better frame of mind. Little Ben was looking forward to his Christmas party. When his dad asked him what he expected, he said, “presents.” Then, he went on, and on about “cookies,” “food,” and more “presents.” It seems that cookies rate highly on his approval list. Several times, he told his dad about them. As Andy noted, his cute little kid certainly seems excited about the Christmas season.

Working Up Enthusiasm For New Year

Andy Cohen also shared some clips of himself walking around New York with his friend Anderson Cooper. He seems more into New Year than Christmas in 2021. Actually, trying to get Cooper into the New Year spirit, he told him that he brought “two quarts of alcohol.” Well, hopefully, before then, Santa brings him some Christmas cheer.

Be sure to catch up on everything happening with the Bravo franchise right now. Come back here often for more news and updates from Andy Cohen.

Days Of Our Lives (DOOL) Spoilers: Xander Grills Rex About His Last Conversation With “Sarah”