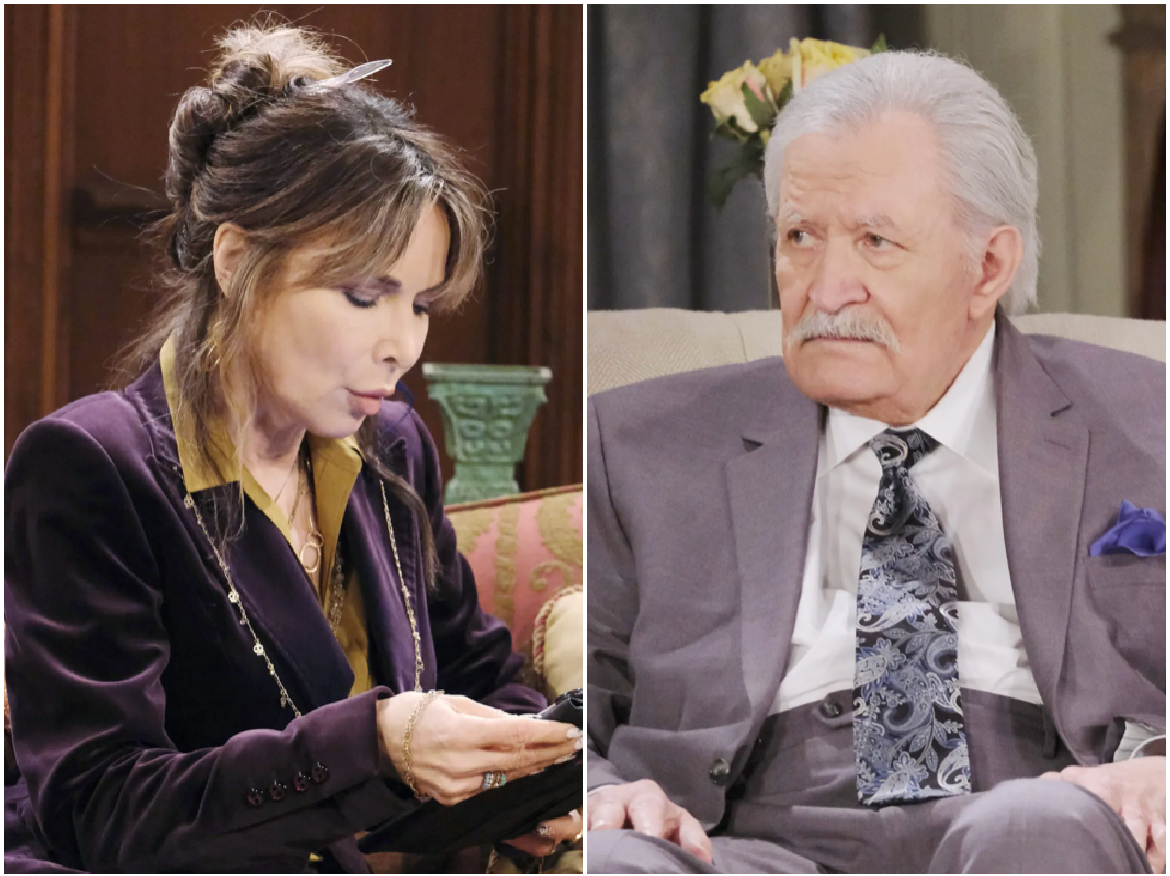 Days of Our Lives spoilers tease that there will be devastation and anger as Kate DiMera (Lauren Koslow) and Victor Kiriakis (John Aniston) learn their son Philip Kiriakis (Jay Kenneth Johnson) is not only missing, but presumed dead in an upcoming episode of Days of Our Lives!

Days of Our Lives viewers will recall that Chloe Lane (Nadia Bjorlin) found Brady Black (Eric Martsolf) unconscious and bloodied down by the riverbank, after she had gone back to search for Philip. Philip in fact had knocked Brady out with a crowbar and dragged him down there, planting Brady’s watch nearby the tree he and Chloe had planted that Philip himself had pulled out by the roots in a jealous rage! Chloe had left to look for Brady to return his watch but when she came back she couldn’t find Philip anywhere-Days of Our Lives viewers will recall the last sighting of Philip was when he lifted up the knife that was found bloodied near Brady!

Chloe called 911 and Dr. Kayla Johnson (Mary Beth Evans) checked Brady out – she found no wounds but did find he had a bump on the head. The blood was sent to the lab and determined type O, which Chloe recognized as Philip’s blood type, although no DNA testing was done. That likely happens with the blood on the knife. Philip’s phone was found in Brady’s suit coat pocket when Chloe tried to call him. Brady was found to have been quite drunk, according to the blood tests.

Days of Our Lives viewers will see more evidence come in about the missing Philip, tying his disappearance to Brady! The amount of blood which was found on Brady appeared to be quite a bit, which would be expected if Brady had struggled with Philip over the knife, or if he had woken up and stabbed him! DNA testing on the knife may conclusively identify it as having come from Philip, and later his prosthetic leg will float up to the surface of the river, leading the Salem Police Department to conclude that Philip must be presumed dead! Brady’s sister Belle Black Brady (Martha Madison) will spring to Brady’s defense, but her husband Shawn Brady (Brandon Beemer) will be forced to arrest him for the possible murder of Philip! The longer Philip is missing, the more evidence of his presumed death and Brady’s guilt starts piling up!

Days Of Our Lives viewers will see that Victor and Kate will be called into the Salem Police Department, possibly to get blood samples from each of them to positively match the DNA from the blood on the knife to theirs. Victor will be very sad, not wanting to believe that his son is dead, and especially not at the hands of his grandson! Kate will be angry and sad, and she will continue to blame the tragedy on Brady – while Chloe will no longer believe in Brady’s innocence, which will make him heartsick!

Because Brady was drunk – or possibly drugged with a substance with a high alcohol content – he will continue not to remember what happened or when he last saw Philip! Shawn will be stunned himself at the preponderance of evidence, but will have no choice but to continue to investigate Brady as the only person of interest! Days of Our Lives viewers will begin to wonder themselves if Brady killed Philip!