The Little Couple star Bill Klein and his wife, Dr. Jen Arnold flew out of Florida recently and she said they needed some medical checkups. Actually, it was the first time that she flew since the coronavirus began. Well, it turned out that they landed up in New York and Bill needed surgery.

The Little Couple Star Bill Klein Toughs It Out

About six months ago, Dr. Jen Arnold revealed that her son Will hurt himself and needed a visit to the ER. At the time, his mom said that he’s a very “tough” little guy. From his mom’s hashtags and uploads on her Instagram page, fans thought that the young TLC star broke a bone in his Arm. Notably, the cute kid never stopped smiling through his ordeal. Probably, he gets that toughness from his dad.

The Little Couple fans saw that ahead of his surgery, Bill Klein and Jen chatted in an Instagram video. He seemed a bit unsettled but reminded fans he hurt himself earlier this year. At the time, he encountered some wasps. Trying to escape them he ran, tripped, and injured his elbow. Meanwhile, Jen said the doctor thinks he has some bone chips floating around.

Screen Legion reported that this “latest surgery for Bill is one more in a long series of surgeries that began for him in childhood.” In fact, between him and his wife, they underwent surgery nearly 100 times. Well, any surgery makes people feel a bit nervous, but clearly, Bill couldn’t wait to get out of the hospital. Abd, who can blame him for that? 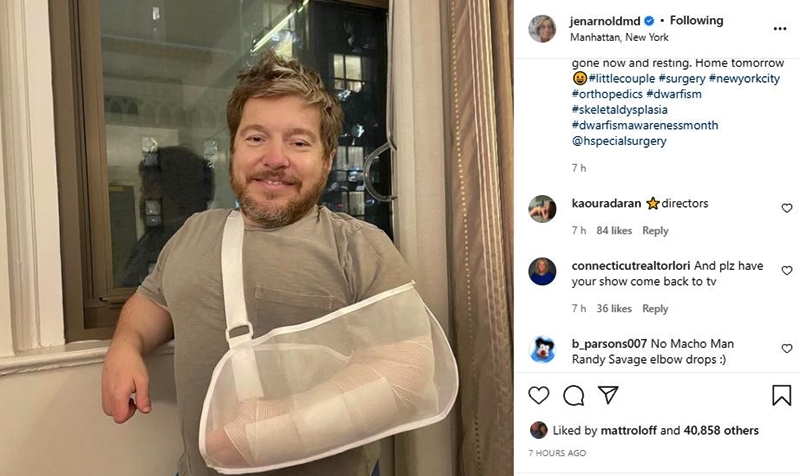 The Little Couple star, Dr. Jen shared a photo of Bill Klein dressed and walking and smiling. His arm was supported in a sling. In her caption, she wrote, “just like that, @reallybillklein is discharged and doing great! He had a large piece of his humerus floating around in his joint. All gone now and resting. Home tomorrow.”

Fans who commented on the photos of Bill Klein felt very happy that he did well after his surgery. Lots of them seemed very relieved. Although they have not been on TLC since 2019, they retain their many fans. A lot of them said they hope to see more of them in a new season. Unfortunately, it’s not at all clear if the show returns.

Fans can still hope that the family just took a hiatus during the worst of the coronavirus. Additionally, so far, TLC hasn’t announced a cancellation.

Be sure to catch up on everything happening with the TLC network right now. Come back here often for more The Little Couple spoilers, news, and updates.