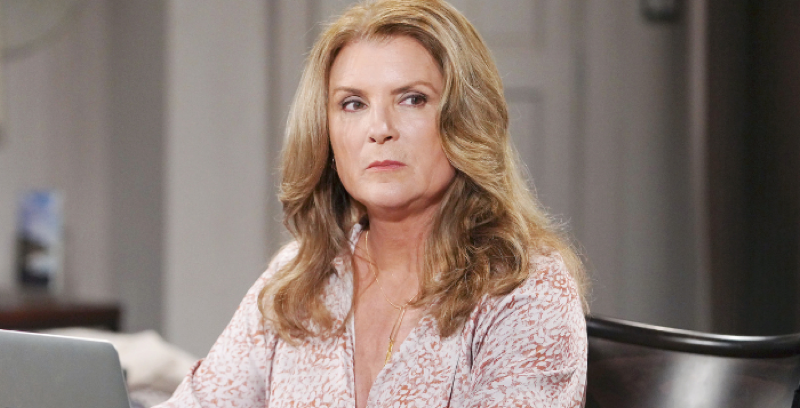 Viewers of The Bold and The Beautiful will recall that attention was definitely achieved when Sheila grabbed Deacon and kissed him in view of her son and his daughter in a recent episode of The Bold and The Beautiful! Sheila and Deacon had been having lunch out in the outdoor dining area of Il Giardino, the restaurant and bar where Sheila had first tried to pull an increasingly drunken Deacon into her schemes.

Sheila is having problems with the Forrester family turning her son, Dr. John “Finn” Finnegan (Tanner Novlan) against her, while Deacon is having problems with both the Spencers and the Forresters keeping him and Hope Logan Spencer, (Annika Noelle) his daughter with Brooke Forrester (Katherine Kelly Lang) apart. All both parents and grandparents want is to be a part of their grown children – and grandchildren’s – lives. At least that is Sheila’s story, and she’s sticking to it. Even Deacon is not convinced that she’s not a dangerous woman though! As the two were having lunch, suddenly she spotted Finn and Hope sitting down at a table across the way, and suddenly Sheila grabbed Deacon and started kissing him passionately as a stunned Finn and Hope looked on!

Longtime viewers of The Bold and The Beautiful and its sister soap, The Young and The Restless know that Sheila always thinks she has the perfect plan and always says she’s a reformed woman. Deacon tells her she doesn’t even believe that herself, and he should know – Finn is not her only child.

Sheila has several children by several different men, and he’s met Ryder Callahan (Wilson Bethel). Deacon also has been in Genoa City, Wisconsin in the past. Sheila even has a daughter, Diana Carter (Weston and Madison Bodle) who would be eighteen now – and she’s Ridge’s half-sister! No one knows what became of Diana, Sheila’s youngest child – she ran off with babe in arms and obviously has returned without her! 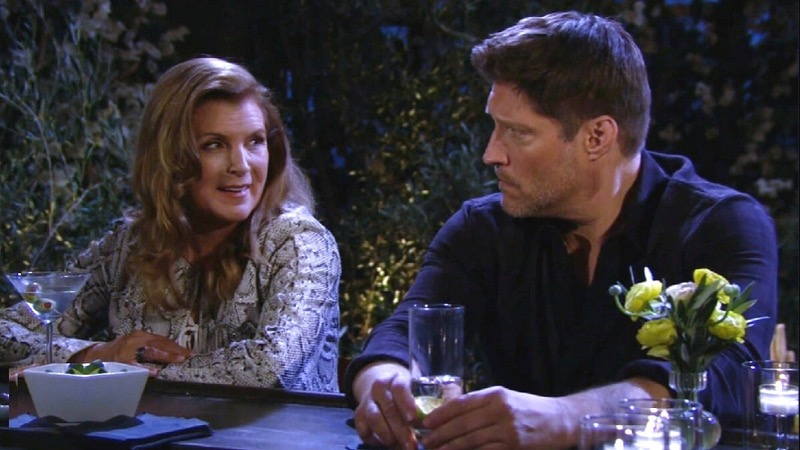 Longtime viewers of The Bold and The Beautiful know that Sheila always begins her patterns claiming she’s changed, and when she is opposed, she turns evil when she doesn’t get her way. No wonder Hope is concerned enough to come over to their table, along with Finn, when they see the couple kissing. Hope is worried that Sheila will hurt Deacon, or worse! Sheila tells Deacon she can see a bond between Finn and Hope, and that bond is what will solve all their problems!

Longtime viewers of The Bold and The Beautiful and The Young and The Restless know that Sheila is a schemer and a master manipulator! She tells Deacon she wants to push Hope and Finn together while manipulating breakups between each of them and their spouses! Sheila has done her homework and she knows how many times that Liam Spencer (Scott Clifton) waffled back and forth between Hope and Steffy Forrester (Jacqueline Macinnes Wood)! She even knows that there was a question of Hayes Forrester Finnegan’s (Piper Harriott) paternity at first, and it wasn’t sure if he was Finn’s or Liam’s! Deacon looks at Sheila like she’s grown a pair of antennae – or are they horns?!

Viewers of The Bold and The Beautiful can imagine the look on Deacon’s face as he questions her crazy plan! Sheila insists all she has to do is use the power of suggestion – but wants Deacon to be the messenger! She wants to push Liam and Steffy back together, and that way Finn and Hope are left with no controlling spouses and she thinks that way Finn and Hope will let them be in their lives and their grandchildren’s! Deacon – he isn’t so sure! Sheila says all he has to do is mention seeing Finn and Hope canoodling together a lot within Liam’s earshot – even if he is talking to Sheila at the time. Deacon will think about it – but it’ll hurt his head and cause the room to fill with smoke!