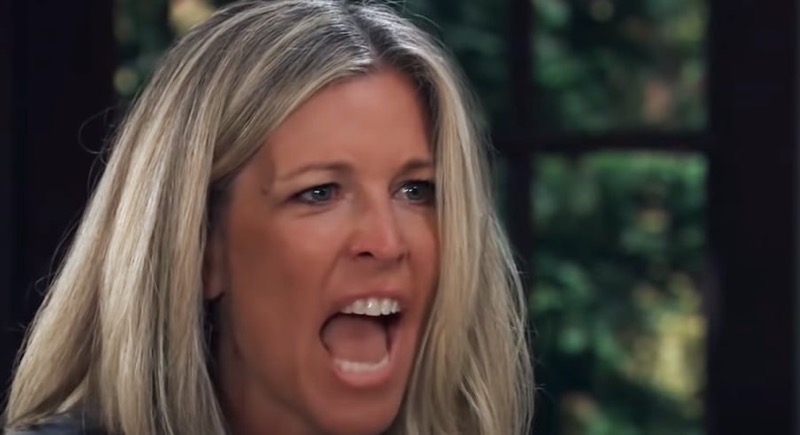 General Hospital (GH) spoilers and updates tease the longer Sonny holds on to the truth, the more painful it will be for Carly to hear. She will explode when she finds out that Mike loved Nina and that her husband still has feelings for her.

Jason Morgan (Steve Burton) and Carly Corinthos (Laura Wright) each told Sonny Corinthos (Maurice Benard) that they almost made love on their wedding night. GH fans waited for Sonny to admit he had fallen for Nina Reeves (Cynthia Watros) in Nixon Falls but he remained silent. Each time Sonny missed an opportunity to come clean viewers suspected something big was coming, and now the perfect storm is brewing.

There are so many layers to this situation and each one will be a thorn in Carly’s side. When the truth comes to light she will be in shock when she hears that Nina was in love with Sonny. Mrs. Corinthos will not be able to handle the fact that her spouse fell for the woman she loathes even with amnesia. She will be especially angry at the fact that she was honest about Jason but Sonny did not do the same where Nina was concerned. How Carly learns the details of Nixon Falls will also anger her.

On Friday Sonny and Nina vowed to never tell Carly what happened between them but it could be out of their hands. Thanks to Michael Corinthos (Chad Duel) Nina has been arrested for identity theft which is ridiculous. Her only crime is the sin of omission for keeping Sonny’s real identity from him. Charges have been made and there will more than likely be a trial. Nina might be forced to tell the truth on the witness stand or Sonny could reveal the fact after watching Nina be grilled by the prosecution. Just imagine the look on Carly’s face if this should happen.

Spoilers indicate that Michael will offer some type of deal to Jasper Jax (Ingo Rademacher) and it probably has something to do with Nina. Jax could reveal to Michael that Sonny as Mike loved Nina. Michael might decide his mother needs to know the truth and tell her. Carly will be furious when she realizes that so many people knew the truth and kept it from her.