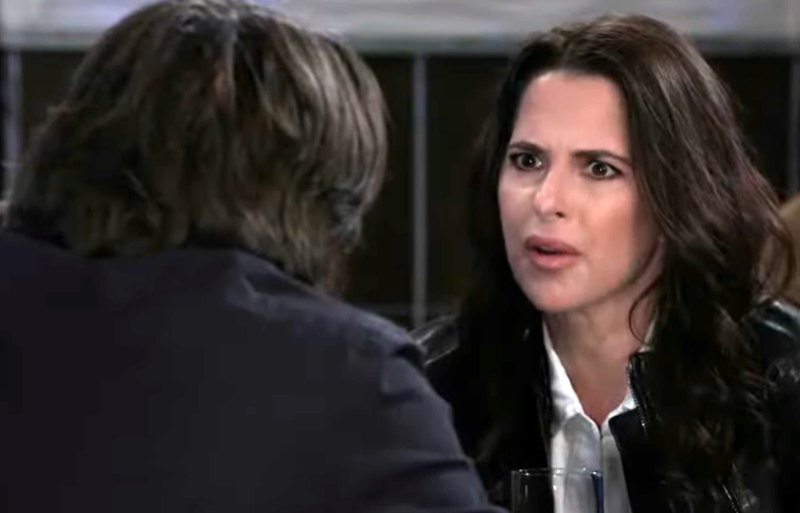 General Hospital (GH) spoilers and tease that in this week’s General Hospital Sneak Peek that Sam McCall (Kelly Monaco) and Dante Falconeri (Dominic Zamprogna) will try to convince a WSB agent who is guarding them to help them break into Victor Cassadine’s (Charles Shaughnessy) compound!

General Hospital viewers will recall from a recent General Hospital episode that Sam and Dante arrived outside the tavern in Panapolis, Greece at a crime scene! Robert Scorpio (Tristan Rogers) and Anna had just been involved in a shootout with a masked man who arrived just as they were questioning the mandolin player with the Cassadine crest tattoo about Valentin Cassadine’s (James Patrick Stuart) disappearance.

General Hospital viewers will recall that the gunman was Drew Cain (Cameron Mathison) whose brainwashing and conditioning had just been reactivated by Peter August (Wes Ramsey)! As a result of the dangerous situation with Peter, and Robert, and Anna’s awareness of how dangerous Victor Cassadine can be, a WSB agent is assigned to guard the two of them. The Sneak Peek opens with Dante, Sam, and the unnamed agent sitting at a table outside the tavern.

General Hospital viewers will see the agent assigned to guard Sam and Dante approach them and sit down at the table. Dante greets the agent with a friendly “hey, all right” and Sam asks him to join them, presumably for a drink, snack, or meal. The agent tells her “no can do” because he is on duty. Sam looks him in the eye as Dante observes her body language as well, and asks the agent if she can go to the restroom.

The agent reaches for his phone and tells her no problem, that he’ll call for backup to have her escorted there. Sam says that’s not necessary, she knows the way. The agent advises her that Agent Devane had warned him not to leave Sam alone – Sam’s response is to laugh in disbelief, and question him as to why! General Hospital viewers will note that Dante continues his intent looks at Sam and the agent. 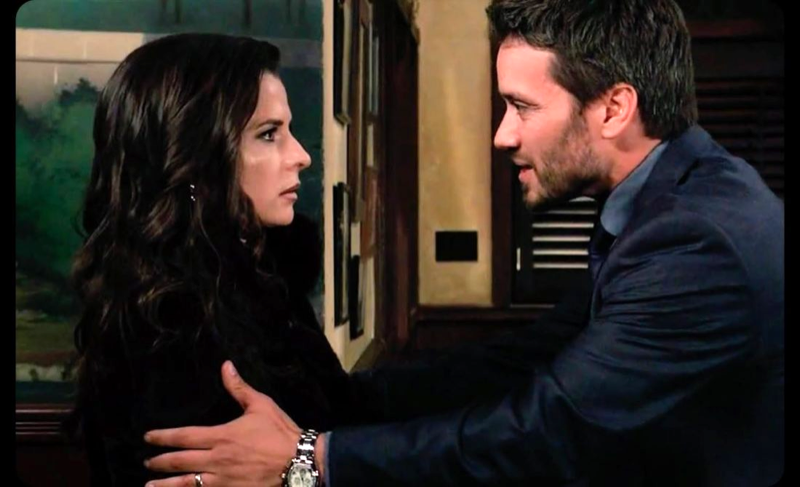 The agent explains that he has to guard her because she’s desperate to get into the Cassadine compound. He verifies that Detective Falconeri had already explained to him that Sam has a personal interest in one of the prisoners. General Hospital viewers would agree with that assessment since Drew called her for help out of the blue after being presumed dead for over two years! Sam confirms her interest to the agent; and verifies that her interest is in Drew Cain.

As the agent looks with empathy and listens to her explanation, Sam tells him that Drew is her daughter’s father. The agent nods with understanding. Sam continues, telling the agent that Emily “Scout” Cain (Ella Ramacieri) is only four going on five years old, and she hasn’t seen her father in half of her whole life! Sam continues, telling the agent that Scout only recognizes Drew from pictures. General Hospital viewers will recall that Drew used to take Scout to work with him at Aurora Media, letting her color at a little table while he did work at his desk.

Dante, who has been looking on during the whole conversation, tells the agent that now they have a chance to reunite Scout with her father. General Hospital viewers will recall that Dante has a young son of his own and it looks like the agent may be a father himself, judging by his concerned looks and nods. Dante continues, asking the agent what is more important – family or following procedure? General Hospital viewers will note that the agent looks more and more concerned, and Sam beseeches him, asking him please – what does he say? The agent doesn’t know what to say but it’s obvious he is sympathetic to their situation!