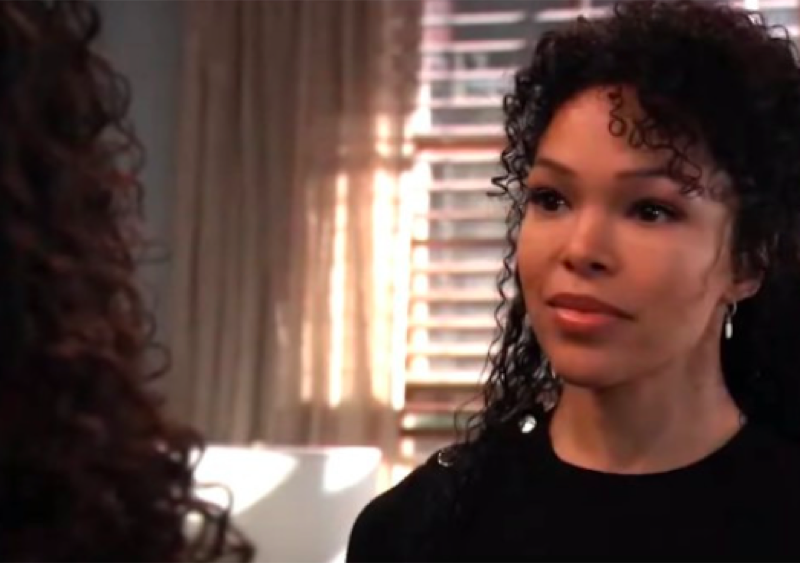 General Hospital (GH) spoilers and updates tease that Portia Robinson (Brook Kerr) is keeping a huge secret from not only her daughter but possibly from Curtis Ashford (Donnell Turner) as well. Portia is rumored to get trapped in a basement and Jordan Ashford (Briana Nicole Henry) may be trapped with her as well. Will some hidden truths surface as the ladies fight to survive?

General Hospital rumors suggest that Portia may be gravely injured and may not survive this trip to help Curtis. It has been suggested that a doomed hint was placed on a GH post concerning the two women and Portia may not survive. However, Portia may reveal the truth that Curtis has been searching for since she turned up in Port Charles. Curtis And Portia had an affair and the timing suggested that Trina Robinson (Sydney Mikayla) maybe his daughter. However, Portia has denied that until now. Portia doesn’t want to turn Trina or her ex-husband, Marcus Taggert’s (Real Andrews) world upside down by revealing anything about Trina’s paternity. However, facing death could make her have a change of heart.

General Hospital Updates – Curtis Ashford Could Be Injured As Well

General Hospital’s rumors could be wrong about the party who is injured and Curtis may take a hit while attempting to save the two women in his life. After all, Jordan is still his wife and Curtis cares about Portia as well. Portia may feel that Curtis needs a reason to pull through and could reveal that Trina is indeed his daughter. After all, Trina knows about the affair now and maybe curious herself. With Jordan being Curtis’ next of kin since they are still married. Portia could reveal Trina’s parentage to Jordan as a way to will Curtis pull through. Is this truth about to come out after eighteen years of lies?

Why Keep The Secret?

Now that General Hospital’s Taggert and Trina know about this affair, why keep up the lie if Curtis is Trina’s father. Does Curtis not deserve to get to know his daughter? Does Trina not deserve the truth after all this time? However, if Curtis dies, is it fair for Trina to lose another father? After all, Taggert already faked his death, and Trina was forced to mourn him. Could Trina lose her real father this time? Will Curtis be cheated out of a chance to know the daughter he never knew he had?

Both Curtis and Portia could be in danger during this mission. However, any of the three could be killed. Will Trina’s parentage be revealed before any of them meet their demise? Will Curtis ever know the truth if Trina is his child?