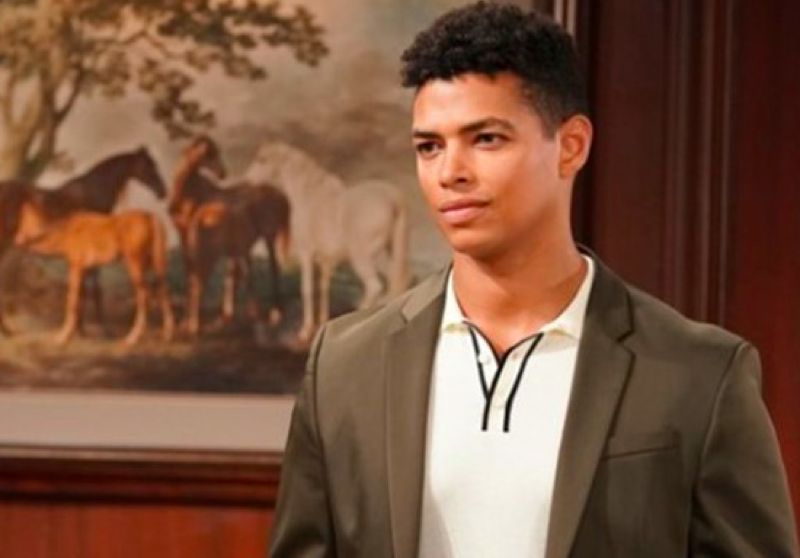 The Bold and the Beautiful (B&B) spoilers and updates tease that Zende Forrester Dominguez (Delon de Metz) thought that Paris Buckingham (Diamond White) was different than her sister, Zoe Buckingham (Kiara Barnes). But a recent development caused Zende to reconsider.

Paris appears to be falling for John Finn Finnegan (Tanner Novlan), which is starting to push Zende’s buttons. B&B fans recall that Zoe was after him while supposedly committed to Carter Walton (Lawrence Saint-Victor). That eventually led to a confrontation.

Paris’ concern for Sinn’s personal matters is natural. She is living at the cliff house. But Zende is likely not going to tolerate being cast in the Carter spot in this relationship.

Steffy Forrester’s (Jacqueline MacInnes Wood) offer for Paris to move into the cliff house was heartfelt. White’s character lived in her car for a short time because she could not afford to pay the rent at Zoe’s apartment after Barnes’ character left town.

Devoted soap fans knew that something strategic was likely involved in the movie, possibly suspecting that Paris was simply being elevated to the plot space that was left when Barnes’ voluntarily departed the cast to star in the nighttime reboot of Fantasy Island.

As an aside, early episodes of Fantasy Island are good, with Barnes’ delivering a compelling performance as Ruby Akuda. B&B fans who watched the premiere episode saw another B&B alumni, Adain Bradley (Xander Avant, who was one of Zoe’s former love interests), play Ruby’s husband.

Ruby is Elena Roarke’s (Roselyn Sanchez) go-to confidant on Fantasy Island. Zoe wants to become that for Finn on B&B.

Paris will become bothered by Zende’s support for Steffy. She shouldn’t feel that way because Steffy is Zende’s cousin.

However, Paris’ view of the deteriorating situation between Steffy and Finn does not reflect a neutral analysis. Instead, Paris’ demeanor around Finn reflects someone who is falling in love.

Her comments about Finn’s physical appearance and her one-sided support for his situation with Sheila Carter (Kimberlin Brown) won’t sit well with Zende. That is not encouraging for fans who have embraced this sweet couple.

Hardcore soap fans know Sheila’s rap sheet. She is a criminal and a sociopath, which is how Steffy described her.

Paris, like Finn, didn’t experience the horrors that Sheila forced into the lives of the Forrester family. Instead, Paris is simply reacting to Finn’s conflicted feelings because she likes him.

Sheila created an intentional rift between Steffy and Finn. Collateral damage could also include the Paris and Zende pairing.