Chrissy Teigen found that online bullying goes both ways last month. Teigen was called out for bullying a sixteen-year-old, and others, and the Internet went crazy over it. A lot of hate went her way as the cancel culture grew against her. Not a usual thing to happen considering her hate for former President Donald Trump. Now, she assured her fans that she reached out to each person and she feels contrite. Do fans buy it?

After harassing Courtney Stodden, who she suggested go and kill themselves, other bullying surfaced and these included targeting Avril Lavigne, Lindsay Lohan, and Sarah Palin. Although Courtney accepted the apology she got, she felt rather skeptical about what motivated Chrissy. In fact, she felt pretty sure that she only reached out to try and “save her partnerships with Target and other brands.” Well, now she made a general apology after days of thought.

It certainly seems like Chrissy Teigen tries making a grab for some of that old popularity. In a very long apology on June 14, she wrote about how she reached out to one person and intends to reach out to more. She added, “Not a day, not a single moment has passed where I haven’t felt the crushing weight of regret for the things I’ve said in the past.” Then, she said that she felt very “ashamed.” Clearly, she had a revelation as she now can’t understand how she could hurt people like that. 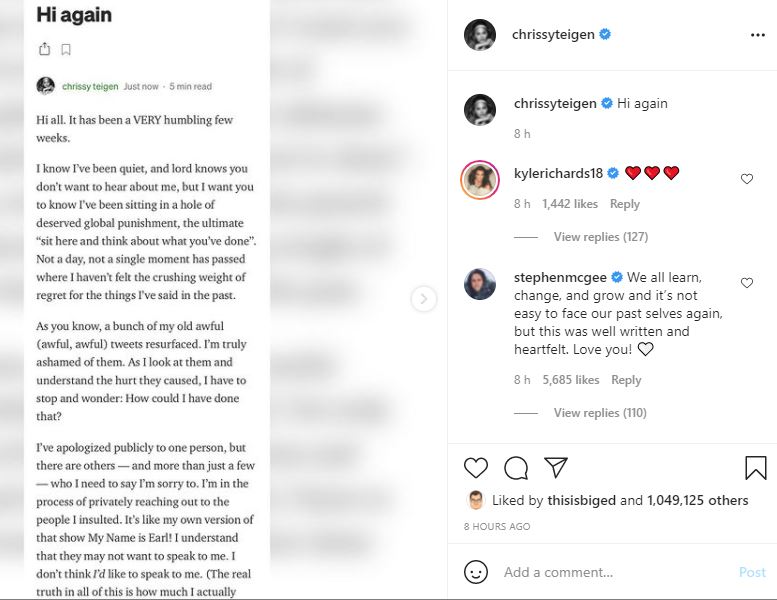 Some Fans Feel In A Forgiving Mood

In the comments section of the post by Chrissy Teigen, a lot of people seem willing to accept that she learned a lesson. One of them said, “I really love empathetic and compassionate Chrissy. We are all works in progress and I love you, OG Luna ❤️.” Then, another person noted, “I think this is one of the best celebrity apologies. No excuses. Just owning it and promising to do and be better.”

Some fans of Chrissy Teigen say that the bullying scandal never affected the way they feel. This comment is a good example: “I can honestly say I never felt any different towards you 😂. They can try to roast me if they want… but I could care less about what someone said online ten years ago as a YOUNG adult. I appreciate how you’ve handled the situation non the less, (sic).”

Remember to check back with us often for more news about Chrissy Teigen as she navigates her way back into the hearts of fans.