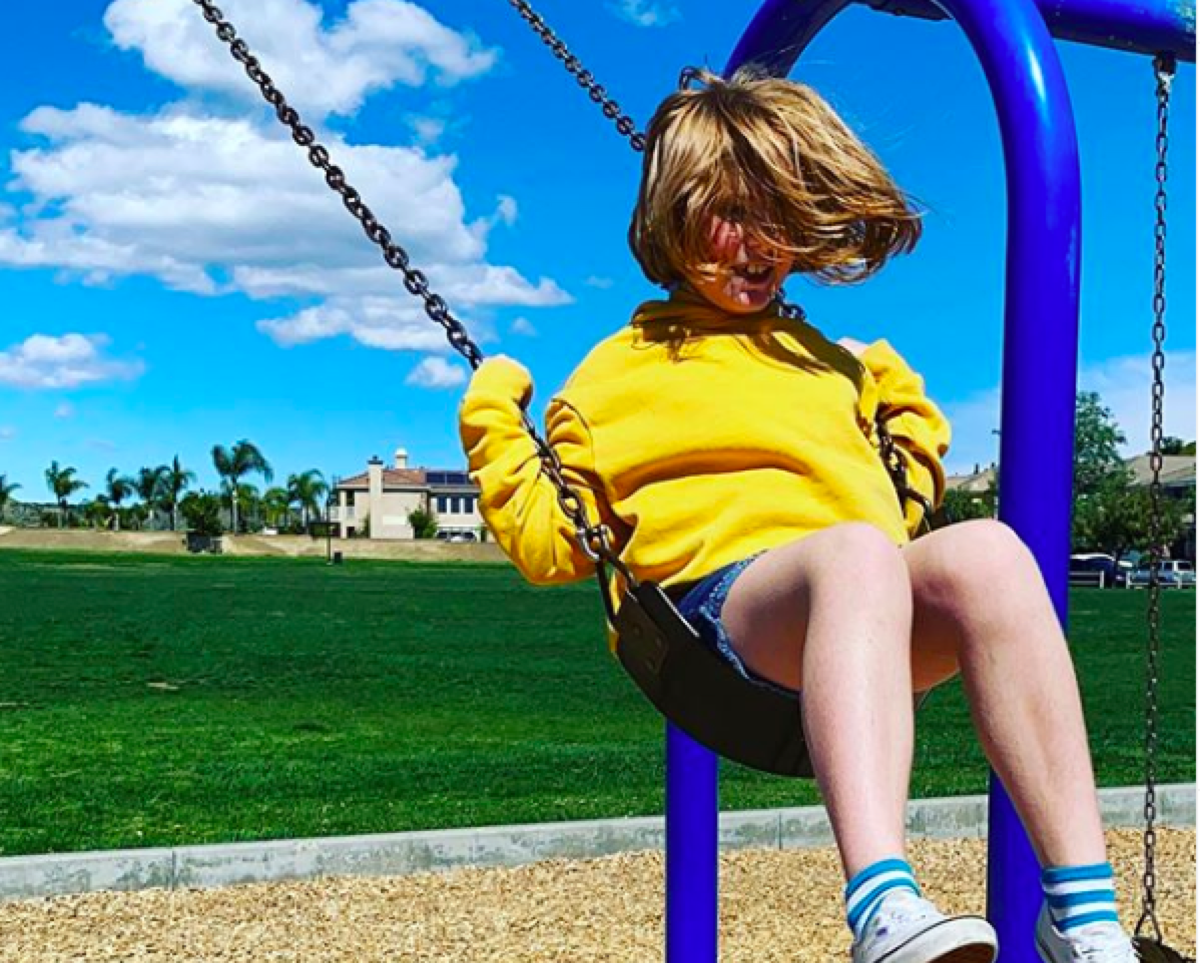 General Hospital spoilers teases that Maura West’s daughter, Birdie West, is having fun during social distancing at “homeschool recess!” Maura recently posted a photo of Birdie on a backyard swing on Instagram where she commented, “Recess at homeschool.”

The two girls are the same age. Birdie recently started her own acting career, in the starring role of “Matilda” at Newhall’s Canyon Theater Guild. Birdie is the youngest of five children; Benjamin, Joseph Peter, Katherine Marie, Basil John, with three older brothers and one older sister, although Benjamin is from Maura’s previous marriage so technically he is a half-brother.

Birdie Recently Started Her Own Acting Career, In The Starring Role Of “Matilda” At Newhall’s Canyon Theater Guild

James Patrick Stuart, who plays Valentin Cassadine on “General Hospital”had high praises for Birdie, who he went to see perform in “Matilda”; he is a father of two boys himself as well as having been a child actor and the son of Chad Stuart of Chad and Jeremy fame. He wrote on his Instagram , “Birdie West, the youngest of the extremely gifted children of Maura West & Scott DeFreitas. This afternoon, I got to watch her in the title role of “Matilda” at Newhall’s Canyon Theater Guild.

A voice that puts a lump in your throat, an absolutely delightful & competent dancer… she commands your attention & earns your trust instantly. Maybe Birdie can thank her mom & dad for the charisma, but her chops are all hers. Such finesse, such nuanced & savvy choices… She had me on the edge of my seat & in the palm of her sweet little hands from beginning to end & never let me down.” That is quite a compliment!

Maura West was born on April 27, 1972 in Springfield, Massachusetts, USA as Maura Jo Snyder. Maura is the youngest of four children. Growing up in Ludlow, Massachusetts, she attended Boston University, graduating with a bachelor’s degree in fine arts. She is an actress, known for “As the World Turns” where she played Carly Tenney Snyder, General Hospital, where she currently plays Ava Jerome Cassadine, and The Young and the Restless, where she played Diane Jenkins.

She has been married to Scott DeFreitas since January 22, 2000, she met her him when they were costars on “As the World Turns”. She is also a New York Yankees fan, and he proposed to her at Yankee Stadium via the scoreboard in center field. West has received a number of honors for her portrayal of Carly, including nominations for the Soap Opera Digest Award for Outstanding Villainess in 1996 for Outstanding Younger Lead Actress 1999 and 2000, and for Favorite Couple in 2001, an award which she shared with co-star Michael Park.

Check out Maura on ABC’s “General Hospital” as Ava, and check out Celebrity Baby Laundry frequently for all the latest news, updates and developments!