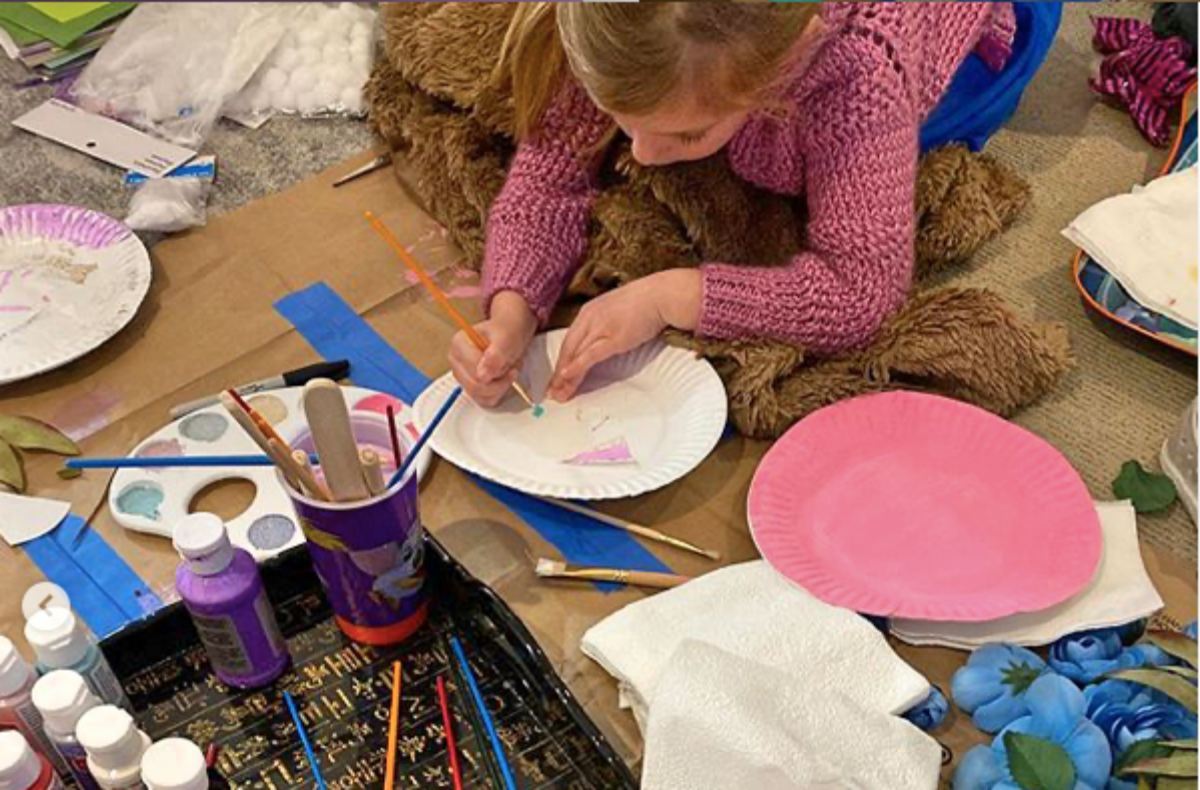 Kirsten is a crafter who knits in between takes of ABC’s daytime drama General Hospital, where she plays Maxie Jones, often joined by castmate and real-life bestie Emme Rylan. Harper recently made a paper plate craft where she drew a lady’s face with a Sharpie pen and made her a hat with polyester roses. Kirsten posted, “Never underestimate the power of a paper plate. Harper wanted to paint on paper plates… So I found a cute unicorn activity on Pinterest and my little Buggy approved it.

She insisted on using a @sharpie to draw the face – this kid has a thing for Sharpies. To her, they are the elite magic marker. Ever since an accident, involving a gold Sharpie and @brandonjbarash’s dining room table, she hasn’t been allowed to use one. Since we were in a safe crafting space, I told her to go for it.

The result is priceless. Harper’s art always has the most expressive faces (please see the post I put up of her holding the bug/monster she made out of clay and note the eyebrows) and she is so serious when creating them. I love the moments where we can share a love for making things. (pic #2 is my expressionless blue unicorn. Don’t compare the two. Her’s is obvi better.) #HarperRose #pinterestinspired #paperplatesarethenewcanvas #BrandonDontBeMadILetHerUseASharpie.” The post she refers to with the bug is at :

How cute is my little munchkin and the monster she made?! We lol-ed over the expression on “Allice’s” face. #HarperRose #kindergartenart

Her father, Brandon Barash, is primarily known for the roles of Johnny Zacharra on the ABC daytime drama General Hospital and more recently as Stefan O. DiMera on the NBC daytime drama Days of Our Lives, although he has also done many appearances in primetime shows, such as portraying author Ernest Hemingway in the canceled NBC primetime program “Timeless”. Harper was named after author Harper Lee, known for the novel “To Kill A Mockingbird” which is one of Brandon’s all-time favorite books.

Her mother, Kirsten Storms currently plays Maxie Jones on ABC’s daytime drama General Hospital, and in the past, she played a teenage Belle Black on Days of Our Lives. Harper made her own General Hospital debut as an actress when she played Maxie and Damian Spinelli’s (Bradford Anderson) baby girl, Georgie Spinelli. One can easily see that both parents absolutely adore their child, although they are divorced. They are very successful at co-parenting and remain friends.

Check out General Hospital to see Kirsten, and watch for news of Brandon’s next appearance on Days of Our Lives. Check Celebrity Baby Laundry frequently for the latest news, updates, and developments!