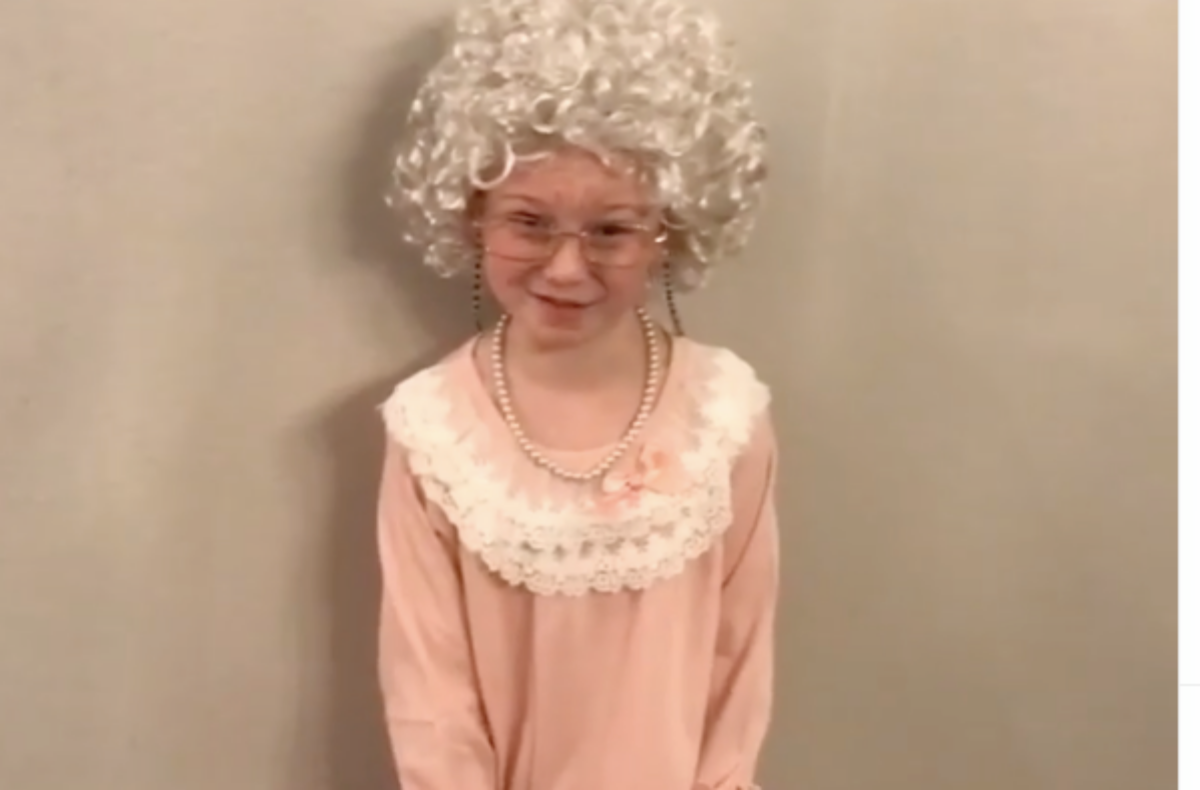 Days Of Our Lives spoilers tease teases that actress Martha Madison’s daughter Charley is really hamming it up on her 100th day of school!

Six year old Charley Elizabeth Gilbert is dressed up like an old lady complete with grey curly wig and granny glasses, introducing herself in a type of southern accent and then she goes dancing off like a horse galloping! Precocious Charley, who her mom calls “Baby President” also recently won an award at school, and Martha noted on her Instagram “I couldn’t be prouder of this little girl! #BabyPresident was honored with the “Curiosity Award” today at school.

Her teacher said, “Charley loves to learn and find out new information and is always so inquisitive. She is the first to jump in and learn something new and really thinks about everything we are learning about in class. I love seeing her face light up when she has an idea!” Go, Charley, GO!!! We are so proud of you! #ProudMommy.” Charley also tagged along with mom when she was filming the NBC “Days of Our Lives” online spinoff, “Last Blast Reunion” where Martha posted a photo of her looking through the television camera!

More About Martha Madison And Her Television Career

Martha Madison was born in Newport News, Virginia but was raised in Houston, Texas. She attended Cypress Creek High School, and graduated from Texas A&M University in 1999 with a degree in psychology, where she was also the Captain of the Texas A&M Dance Team. In 1999, she moved to New York City where she attended the American Musical and Dramatic Academy.

She also danced with the Peyari Dance Project for two years. Unfortunately, after several injuries, she was forced to retire from dance. In 2008, Madison appeared in the primetime drama “Without a Trace” in the episode “Rewind” and also in the “Criminal Minds” episode “The Big Wheel” in 2009. From 2010 to 2014, Madison appeared on the soap opera web series “The Bay” as Marly Nelson-Foster; and in June 2011, Madison temporarily took over the role as Elizabeth Webber on the ABC daytime drama General Hospital, appearing from June 8–20, 2011.

In addition, Madison had a small role in the film “Kate & Leopold” in 2001. She then moved to Los Angeles in 2003 to pursue a career in film/television, and briefly appeared on the NBC daytime drama “Passions” in 2004. Madison next played the role of Belle Black on the NBC daytime drama “Days of Our Lives” from 2004 to 2008, a role in which she still appears on a recurring basis. Also, for a period of time in 2007, she appeared on The Tyra Banks Show to help model/host Tyra Banks through “soap opera school.”

Watch for Martha on the NBC app or nbc.com on the digital series “Last Blast Reunion” and keep checking Celebrity Baby Laundry frequently for all the latest news, updates and developments!