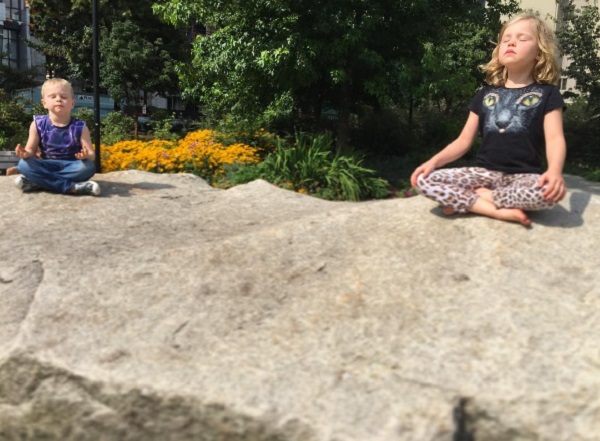 Neil Patrick Harris’ twins Harper and Gideon are living the good life!  Neil Patrick Harris, who is most well known for his role on “How I Met Your Mother” and his husband David Burtka’s little ones – are not so little any more.  Harper Grace and Gideon Scott were born in 2010, and they will be turning 6 years old this October!  Doesn’t it seem like just yesterday that Neil and David announced they were having twins via surrogate?

Proud dad Neil Patrick Harris is constantly keeping his followers up to date on Instagram with snapshots of Harper and Gideon, and it looks like the twins are having an amazing summer.  And, they certainly know how to make the most of it!

Our absolute favorite photo of the twins was posted earlier this month, and shows Harper and Gideon sitting on large rocks, and meditating!  Seriously, don’t you wish your children meditated when they were six years old!  That seems like a surefire way to get some peace and quiet.  Neil captioned the sweet photo, “Meditation Rocks.”  It looks like Neil and his family also were able to squeeze a trip to Los Angeles in this month as well, you know when they weren’t meditating, and the actor posted an awesome underwater photo of Harper and Gideon splashing in their hotel pool.

It looks like Neil Patrick Harris and his husband David Burtka are raising some great kids, and we love getting to watch them grow up on social media!

Thanks @montagebh for making our vay-cay stay in LA so enjoyable. The rooms are classy, the staff uniformly fantastic, and the rooftop pool a massive hit.