Alec Baldwin Bonds With Baby Rafael At The Beach 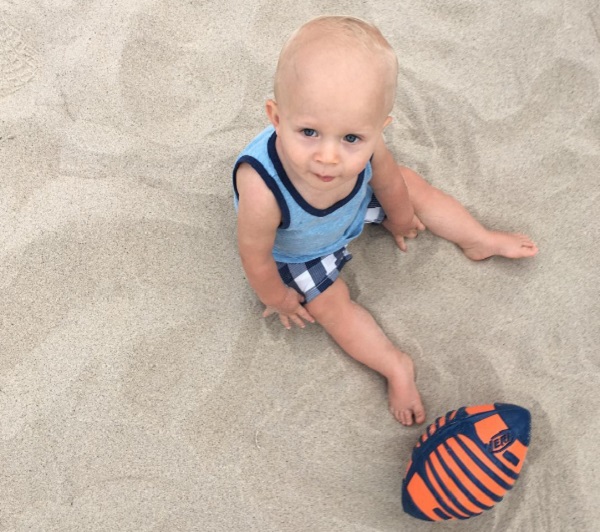 Alec Baldwin took advantage of the weekend to squeeze in some family time, the actor shared an adorable photo of his 1 year old son Rafael Thomas Baldwin playing in the sand at the beach.  Alec referenced the iconic Tom Hanks film Castaway and jokingly captioned the photo of Rafael playing with a ball, “Castaway Rafa with his own Wilson.”

Alec Baldwin and his wife Hilaria Thomas are currently expecting their third child together, in the past couple years they have already had 2 year old Carmen Gabriela Baldwin and 1 year old Rafael.  Alec also took to Instagram this month to brag that little Rafael has officially taken his first steps, and he is now the proud dad of a walking toddler!

Meanwhile, Rafael’s mother Hilaria Baldwin is busy counting down the days until the arrival of Rafael and Carmen’s baby brother.  Hilaria has been keeping her Instagram followers updated on her third pregnancy, and seems to be nearing the end of the road.

After revealing her third pregnancy, Hilaria shared an emotional message on social media about being a mom.  Alec’s wife penned, “Siblings I have to say I was nervous to become a mom. When I was pregnant with Carmen, I was scared that I would not be enough for her. That all disappeared the moment she was born because the love and devotion that immediately appears, is so overwhelming and all consuming. Then I got pregnant with Rafael…I was scared to rock Carmen’s world and change her dynamic of being the center of attention–I was afraid I would not be enough for two. Again, as soon as he was born, all of that vanished as my heart only grew and my devotion doubled. Now, I see these two…and I marvel at how deep their bond is. I’m, for the first time, not scared of the arrival baby number 3….because I know that it only gets better and better. SOUND UP FOR THE SOUNDS OF HAPPINESS.”