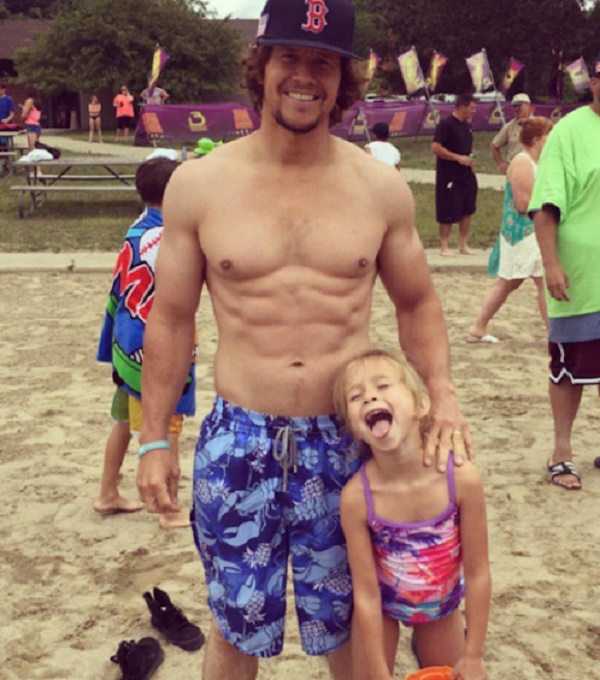 Mark Wahlberg doesn’t spend a whole lot of time on social media, but the busy actor and entrepreneur does share some awesome snapshots of his growing kids when he does have time.  This week Mark Wahlberg posted an adorable photo of him and his daughter Grace soaking up the sun on a Michigan beach together!

Mark Wahlberg’s latest girl Grace is grinning from ear to ear and sticking out her tongue as she poses with her shirtless dad in the sand.  Wahlberg captioned the photo, “Last weekend with my daughter Grace at Jump Island. #Michigan.”

It seems like just yesterday when Mark Wahlberg and his wife Rhea Durham announced they had another baby on the way.  Grace Margaret Wahlberg was born on January 11, 2010 – and she’s already 6 years old!  Grace is the youngest of Mark and Rhea’s four children.  She has her big sister Ella Rae, who is already 12 years old, and two older brothers, Brendan Joseph (7 years old) and Michael (10 years old).

Grace’s parents Mark and Rhea have been spotted out and about quite a bit this summer.  It looks like the Wahlbergs are having a pretty low-key summer, and have been attending the boys’ soccer games together.  Mark and Rhea seem to work hard to keep the romance alive, despite having four kids, recently Mark Wahlberg appeared on The Ellen Show and teased that he keeps his wife interested by “dressing up as a handyman for her.”

Alec Baldwin Bonds With Baby Rafael At The Beach