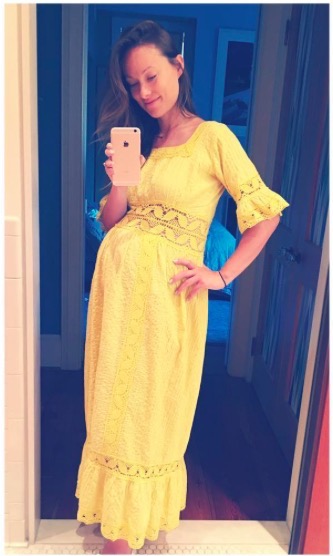 Olivia Wilde shared an adorable photo of her baby bump dressed up in a cute yellow dress. The actress poked fun at her figure in the Instagram pic.

“What to do when you look like Homer Simpson ate Little Miss Sunshine? Chill the f out. They’re both heroes,” Wilde joked. “But also go to the @bkflea and score a dress from 1974, when apparently someone stretched out the middle part juuuuust the way you need it. #oldisthenewnew #vintage @waywardcollection.”

The actress is expecting her second child with comedian Jason Sudeikis.

Wilde announced she and Jason were expecting their second child via Instagram.

The couple announced their engagement in January 2013 but have yet to share any wedding plans.