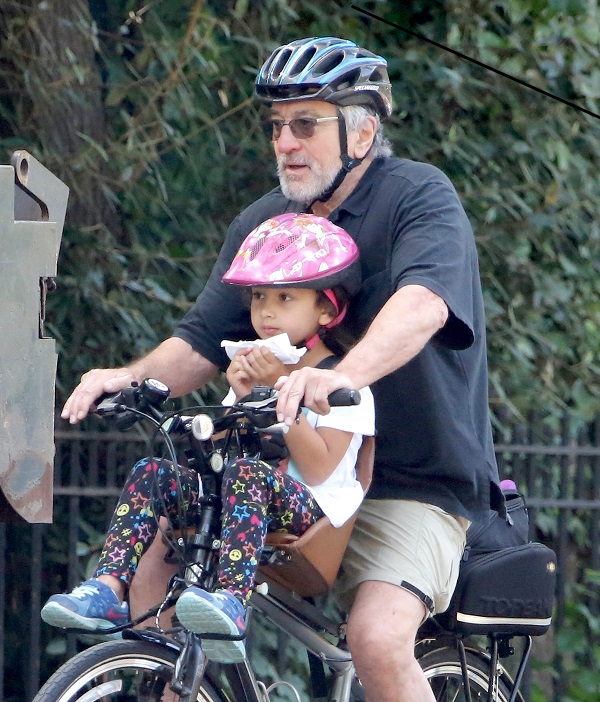 Robert De Niro was spotted in New York City on Monday June 27 2016 spending some quality time with his daughter Helen.  Robert took Helen for a bike ride in NYC’s Central Park, of course both father and daughter were practicing proper bike safety and sporting helmets in case of an accident.  Helen enjoyed a snack in her seat as her 72 year-old father pedaled along, enjoying the beautiful summer day.

Helen Grace De Niro is 4 years old now, it’s hard to believe that 4 years have passed since Robert and his spouse Grace Hightower introduced their baby girl to the world.  Helen was born via surrogate back in 2012.  Since Helen Grace’s birth, Robert De Niro has been a very hands-on father, and he is constantly being spotted around NYC with his and Grace’s smiling toddler.  Robert certainly isn’t letting his age get in the way of being a Dad to the active 4 year old.

When Robert De Niro isn’t busy spending quality time with little Helen Grace in Central Park, the award-winning actor has been working on a new business venture in Chicago.  This month Robert De Niro’s new hotel, “Nobu,” in Chicago, Illinois.  The hotel is going up in the West Loop, and will have 103 Japanese themed rooms, plus a spa and restaurant, De Niro’s investment is expected to open in Fall 2017.