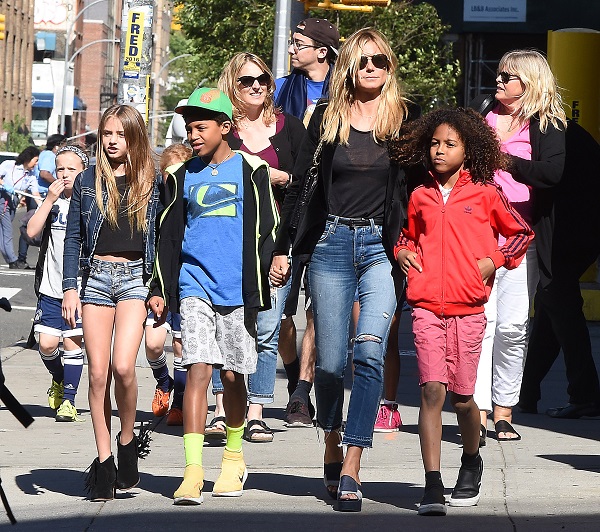 Supermodel Heidi Klum has been pulling double duty these days, when she isn’t working on the current season of NBC’s ‘America’s Got Talent,’ she’s been busy playing mom to her four kids.  Heidi Klum was spotted in the busy streets of New York City over the weekend with her kids in tow, they held hands as they made their way through the crowds to make sure nobody got left behind.

Heidi Klum and Seal’s kids are growing up so fast!  The youngest of the brood, Lou, is no 6 years old.  And, Heidi’s eldest daughter, Leni, is officially 12 years old and can be considered a tween.  Leni and Lou’s brothers Johan (9 years old) and Henry (10 years old) are growing in to handsome little guys.  Heidi and the kids were all smiles on June 9 as they explored the bustling streets of NYC.

Heidi and Seal have been splitting their time with the kids since their amicable split a few years ago.  Both parents have moved on and have been navigating the complicated world of co-parenting like pros.  In May Seal was spotted at the park for Henry and Johan’s soccer games, with his girlfriend Erica Packer in tow, and her three children.  This month rumors popped up that Heidi might actually be secretly engaged to her current boyfriend, Vito Schnabel.

We love seeing sightings of Heidi and her kids, they always seem to happy and full of life.  There must never be a dull moment in the Klum household with four energetic kids ages 6 – 12 years old!