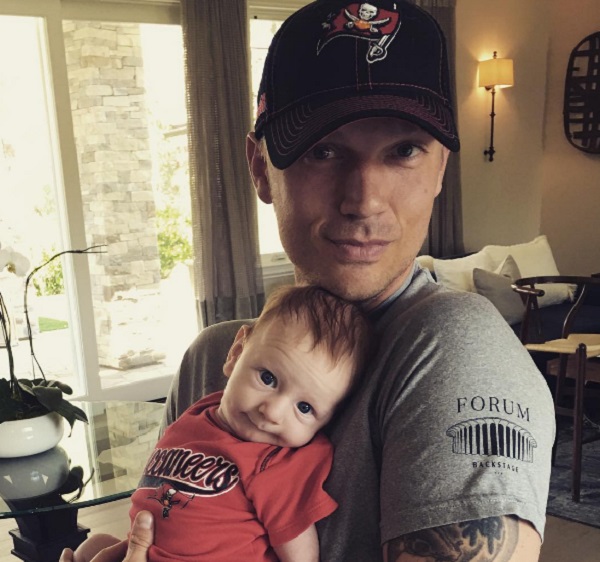 Backstreet Boys singer Nick Carter is starting his 2 month old son Odin young and making sure that he grows up to be a proud Tampa Bay Buccaneers fan.  Wow, Nick is not wasting any time!  Carter took to Instagram this week and shared an adorable new photo of him posing with his baby boy Odin, the newborn is wearing a Tampa Bay Buccaneers onesie, which matches his Dad’s hat.  So cute!

Backstreet Boy singer Nick Carter recently appeared on Dancing With The Stars on ABC, during his stint on the reality TV dancing competition, Carter and his wife Lauren Kitt-Carter announced on live television that she was pregnant with their first child together.  Odin Reign Carter was born on April 19 2016, a rep for the couple confirmed at the time that poor Lauren was in labor for over 30 hours, and she had a home birth.

Since Odin Reign was born, Lauren and Nick have been keeping fans updated on their handsome little man on social media.  And, we can’t get enough of their pictures, for obvious reasons.

When Nick isn’t busy prepping little Odin to be a Buccaneers fan and posting adorable selfies with his baby boy, the singer has actually been in the studio with his former 90’s boy band Backstreet Boys.  In the caption Nick revealed that they are working on a new album, and also working on a collaboration with the popular country music group, Florida Georgia Line.