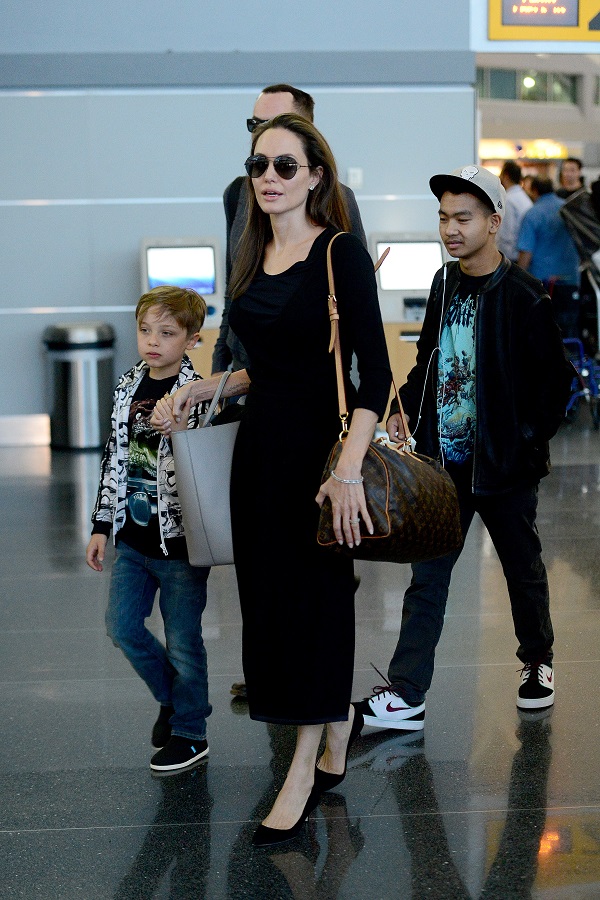 Angelina Jolie had some handsome travel companions over Father’s Day weekend.  The actress was spotted at the LAX airport with her two sons – Knox Leon Jolie-Pitt and Maddox Jolie-Pitt.  Angelina and her boys flew in to LAX Airport in New York City on Friday June 16.  Angelina’s hubby Brad Pitt was spotted arriving in NYC later in the weekend with the rest of the kids.

Angelina Jolie recently sat down with BBC Radio 4’s Women’s Hour for an exclusive interview.  The actress dished on raising her six children with her husband Brad, and how unique they are – each of her children have their own interests and passions.

The 41 year old mother explained, “All the kids are learning different languages.  I asked them what languages they wanted to learn and Shi is learning Khmai, which is a Cambodian language, Pax is focusing on Vietnamese, Mad has taken to German and Russian, Z is speaking French, Vivienne really wanted to learn Arabic, and Knox is learning sign language.”   During the interview, Angelina also opened up about her decision to have a double

During the interview, Angelina also opened up about her decision to have a double mastectomy and have her ovaries removed because she wanted to increase the odds of living a long and healthy life after her mother passed away from a lengthy battle with cancer.

We love seeing the Jolie-Pitt Family out and about.  Maddox is getting SO BIG, it seems like just yesterday Angelina and Brad were announcing that they had adopted him.  And, little Knox appears to be the perfect mix of his father Brad Pitt and Angelina Jolie.  What a beautiful family!

Lauren Silverman Has Lunch With Son Adam In NYC