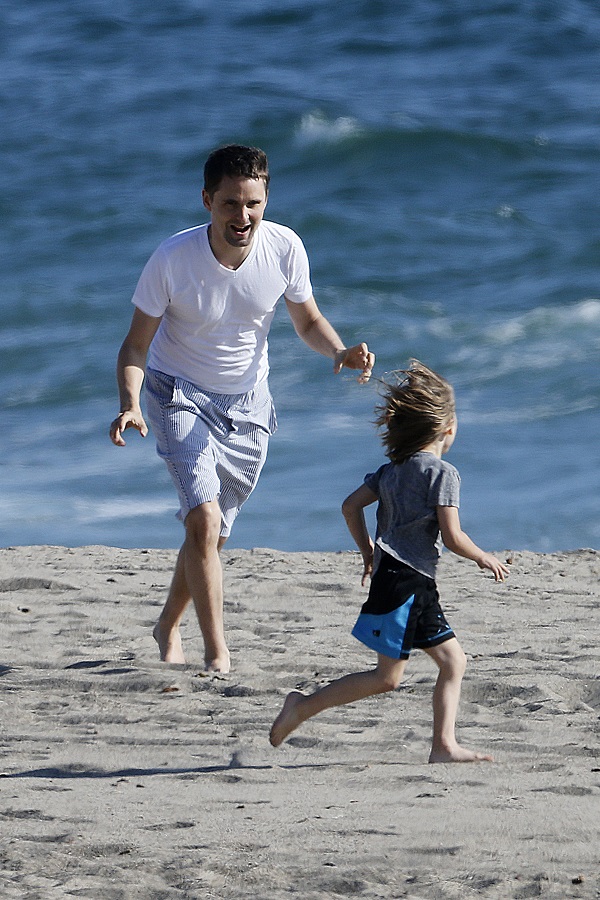 Matt Bellamy hit the beach in Malibu, California on Monday May 23, 2016.  The Muse frontman brought along his adorable 4 year old son Bingham Hawn Bellamy, and the dynamic duo had a blast on the beach and appeared to have enjoyed their father and son time together.

Matt Bellamy and Bingham arrived, and Matt let Bingham ride around in the parking lot on hi skateboard for a bit, completely suited up in a helmet and pads of course.  But, for a four year old, he has got skills!  Then, Matt Bellamy and his son headed down to the water and chased each other around in the sand.  Exhausted after an afternoon of fun and games, they sat together on the beach and enjoyed the view of the waves.  What a perfect day!

Bingham Hawn Bellamy is the son of Matt and actress Kate Hudson.  He’s also the Grandson of Goldie Hawn, in case you couldn’t tell by his middle name.  Kate Hudson and Matt Bellamy began dating in 2010, and little Bingham came along a year later.  Hudson and Bellamy were engaged to be married, but they called it quits and split in 2014.   Bingham also has a big brother named Ryder (10 years old), he was born during Kate’s previous relationship with musician Chris Robinson (Counting Crows).

Despite the fact that Kate Hudson and Matt Bellamy are no longer together, they appear to be doing a great job co-parenting Bellamy, and both are spotted often spending time with the 4 year old.  And, he is obviously a happy and healthy little boy.  Bingham will turn 5 years old this summer, in July.