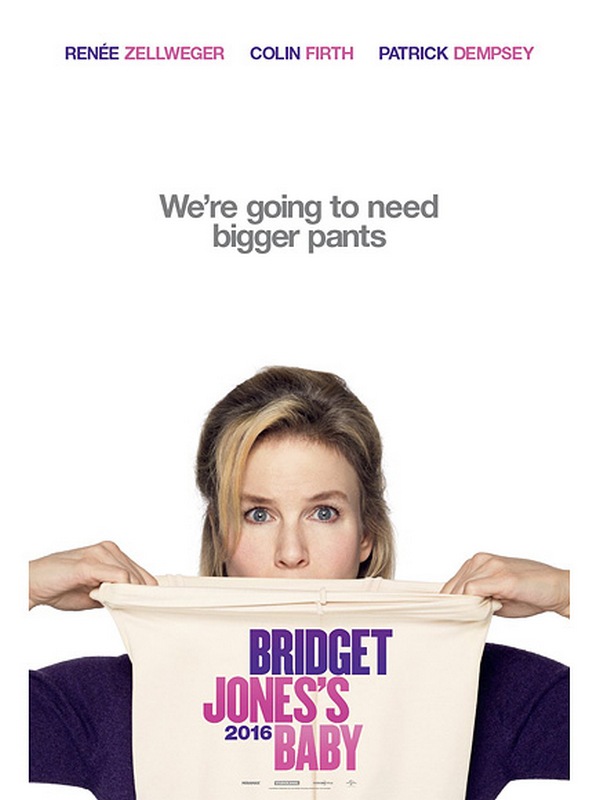 The poster for ‘Bridget Jones’s Baby’ 2016 starring was shared by Miramax on Twitter. The trailer the ‘Bridget Jones’s Diary’ sequel was released two weeks ago on March 30. The poster teases that Bridget [Renee Zellweger] is going to need bigger pants.

The Twitter photo shows Renee stretching out the elastic waistband on her famous spandex undergarments. Splashed across the panties is, “We’re going to need bigger pants” with a surprised Bridget peaking over the top.

Related: Monica Potter On TV Shows And Movies For Children

“Bridget’s big pants are about to get a whole lot bigger. Check out the int’l teaser poster for #BridgetJonesBaby,” the Miramax caption reads.

Single once again Bridget has a new job as a producer for a top news program. She is trying, but not succeeding, to maintain a cordial relationship with ex-Mark Darcy [Colin Firth].

Then Bridget, quite literally, falls for a new Prince Charming. Jack Qwant [Patrick Dempsey] is the handsome hunk Bridget meets after tripping and landing face first into a large pile of horse manure.

In true Bridget style the single London girl’s life becomes a series of mishaps, including an affair with both Mark and Jack. Entering her 40s Bridget finds herself pregnant – and unsure which man is the father.

The men don’t know about the each other, and Bridget is determined to keep it that way. Mum is horrified that her daughter isn’t 100 percent certain about the baby’s paternity. Dad is thrilled he’s going to be a grandfather.

Get read ‘Bridget Jones’s Baby’ hits theaters in September 2016! Who is the father of Bridget’s baby? Which man will give Bridget her happily ever after? Are you rooting for Mark Darcy or new guy Jack Qwant?