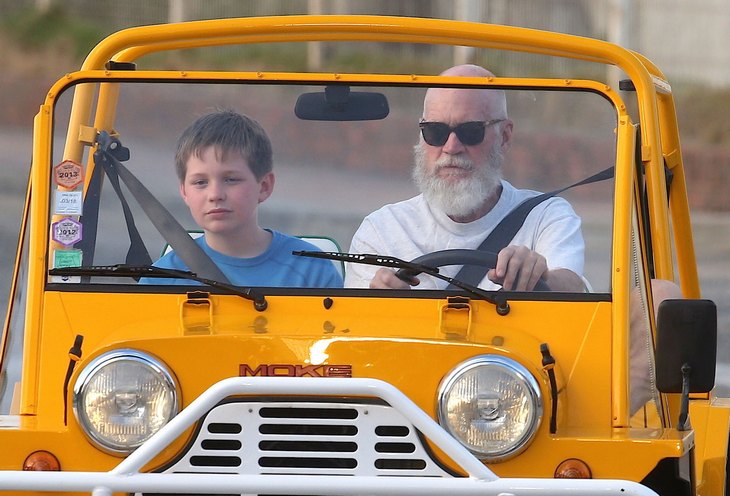 A nearly unrecognizable David Letterman and his son Harry enjoyed some fun in St. Barts. The ‘Late Show’ host has been enjoying retirement and looks completely different. Letterman and his family are enjoying some fun on the Caribbean Island, and Harry took a ride in a funny car with his famous father.

David Letterman’s new look shocked some. His bald head and bushy beard earned him some praise as skinny Santa. While some may like the shaggy look, David admitted his family is definitely not a fan of the beard. “I had to shave every day — every day — for 33 years,” he said. “And even before that when I was working on local TV. And I just thought, the first thing I will do when I am not on TV is stop shaving. Everybody hates it,” Letterman said with a smile. “My wife hates it. My son hates it. But it’s interesting. I’ve kind of developed a real creepy look with it that I’m sort of enjoying.”

You might also remember the busy look from 2008. During the Writers Guild of America strike, the comedian joined other talk shows hosts in growing a solidarity beard.

The former ‘Late Show’ anchor has also rekindled his love for running during his retirement. He has been spotted jogging on several different occasions. Good for him! Keeping fit is so important at any age.

Do you have big plans or something crazy you’d like to do when you retire? Share your thoughts or crazy retirement stories in the comment section below.