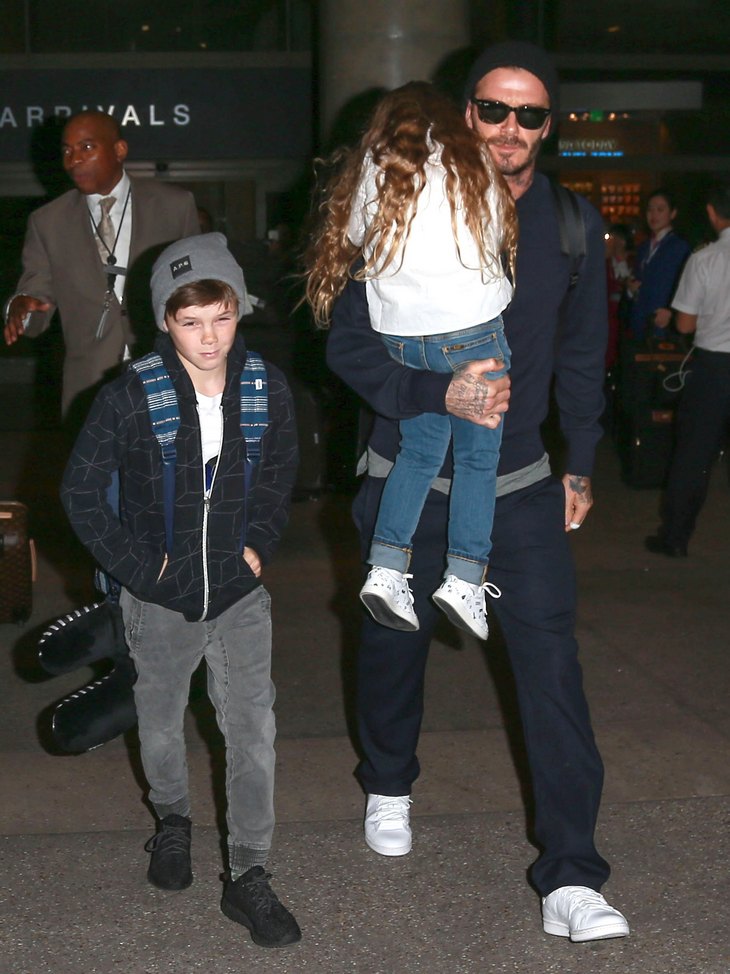 David Beckham escorted his family through LAX on an airport adventure, but Brooklyn, Romeo, Cruz, and Harper Beckham are travel pros. The Beckham kids walked through the Los Angeles airport without hesitation.

The soccer star dad carried his daughter, Harper, through the airport with a smile and made sure to check on his sons. Brooklyn, 17, Romeo, 13, and Cruz, 11, followed as the famous family was escorted through LAX. Fans took pictures of the Beckhams. Victoria Beckham was not with her crew, but David looked like a confident poppa. The former Spice Girl is busy in South Korea and Hong Kong working on her fashion line. Of course, the Beckhams were dripping with style. Brooklyn totted around a Louis Vuitton suitcase, while Harper rocked Karl Lagerfeld Choupette trainers.

David has always been a proud father and tries to keep his grounded while giving them the best opportunities. Beckham explained to GQ, “We’ve always protected our children…but we’ve always been honest with them, as well. There’re going to be things said about you, about us, that aren’t true. Brooklyn is 16 coming on 17, and we know he’s going to make his mistakes—and we know he’ll have opportunities because of us,” the football admitted. “But he’s making opportunities for himself, too. So far we’ve been very lucky that he’s found a passion. Whether people believe it or not, he’s got talent. He’s got a great eye—and proven that in the images he’s taken.“

What do you think? Is there some nepotism going on? Would you do the same for your children? Let us know your thoughts in the comment section below.