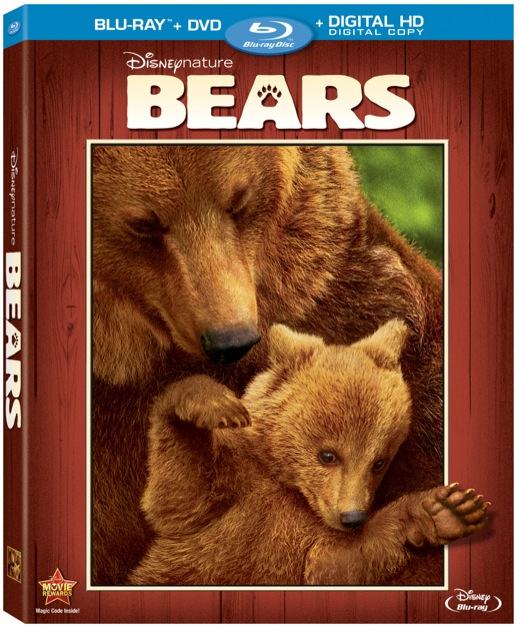 Get ready for an epic true life journey in the Alaskan wilderness from DisneyNature: Bears.

This visually outstanding documentary which releases on Blu-ray Combo Pack on August 12th, documents a year in the life of Sky, a new brown bear mother and her two cubs. The film begins with Sky in her den during winter’s hibernation and her tiny cubs Scout and Amber just after birth. When springs comes, we see her and the two cubs exit the den for the first time to face the bitter cold and the trek down from the mountainous area. The world is new and exciting, but a scary place for two bear cubs.  Sky must protect her cubs from rival male bears and predators while working hard to find food. The journey is anything but easy!

DisneyNature’s Bears is a great beginner documentary for children that will spark their interest in nature and all the beautiful things it has to offer. Learning about brown bears and the Alaskan wilderness is fun and easy. The narration is done in a way that helps engage children and keep their interest in Sky and her cub’s journey. Information is also transmitted naturally through the storytelling, allowing children to associate the facts with the story presented to them. 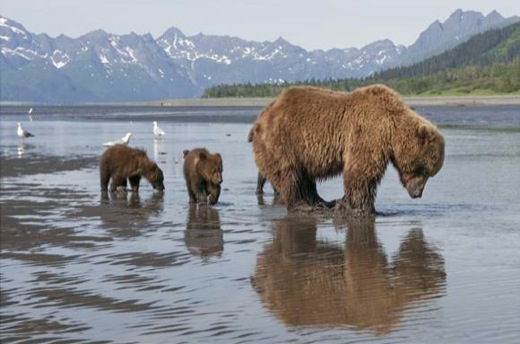 As a mom myself, Sky’s journey really captured my heart. Being a bear mom, is anything but easy! She must protect her family from constant threats while providing and teaching them the fundamentals of bear life. This is incredibly hard considering she needs to stay away from areas that food is readably available in order ensure her cubs are safe from hungry rival male bears. She even takes on a dominant male bear twice her size all for the safety of her cubs. Her resolve as mother never wavers and she continues on her journey to find safe food despite being incredibly weakened from her own lack of nourishment.

The quality of the HD filming is amazing and it almost felt as if I was making the journey alongside Sky and her cubs. My husband couldn’t believe how close the filmmakers got to the brown bears! We really enjoyed watching the bonus features which showed how the documentary was filmed.

Welcome To Alaska: Tracks the filmmakers as they set forth on an epic journey to film Sky and her cubs out in the wilds of the Alaskan frontier.

A Guide to Living With Bears: Introduces viewers to the guides who instructed the filmmakers on how to work with these magnificent creatures

How Did They Film That?: Provides an inside look on some of the extreme filmmaking that went into getting shots high in the mountains and under frigid cold water.

The Future For The Bears: Spotlights a special visit to the film’s production from legendary primatologist and conservationist Jane Goodall

The Blu-ray/ DVD combo can be purchased at Amazon

To Celebrate the in-home debut of “Bears,” Disneynature is proud to continue the conservation program initiated with the film’s theatrical release. For every purchase of the movie through August 19, 2014, Disneynature will make a donation through the Disney Worldwide Conservation Fund to the National Park Foundation, the official charity of America’s national parks, to further protect and conserve endangered or threatened wildlife and wild places as well as enhance field research across more than 2.9 million acres of National Park Service land.

Items To Make Your Family Vacation Perfect This Summer