Science tells us that a mother’s impulse to love and protect her child is hardwired into her brain. These instincts have led moms to do some pretty courageous things in the name of their children. And Christina Simoes is one mom prepared to do anything to protect her son.

Christina, mother to 18-month old Cameron, first noticed smoke in their Massachusetts home while lying in bed with her son. When she saw flames less than 10 feet away and realised they were trapped in their apartment, she ran to the window and jumped three stories with her toddler. She cushioned his fall by holding him tightly in her arms.

At that point, I got up into the window and I put my legs out, and then I grabbed my son and I gave him a kiss. Told him I love him and then I jumped.

After hitting the ground, she told her son to run as debris fell around them. While Cameron remain unscathed, Christina suffered a serious vertebrae injury. She is unable to walk – and she might never be able to walk again. 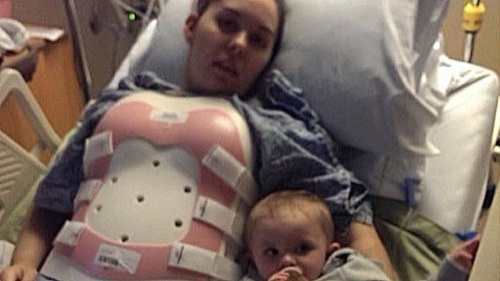 I just knew we were either going to die or we were going to get out of there. All I was thinking about was getting him out of there. He mattered way more than I did.

The story of Christina’s heroic jump has spread internationally, and a campaign to raise money for the brave mom’s medical bills has already raised 36,000$.

Christina responded to the attention by saying:

I don’t think that I’m any special hero at all. I’m just Cameron’s mom.

Angelina Jolie: Our Children Envision a Disney or Paintball Wedding