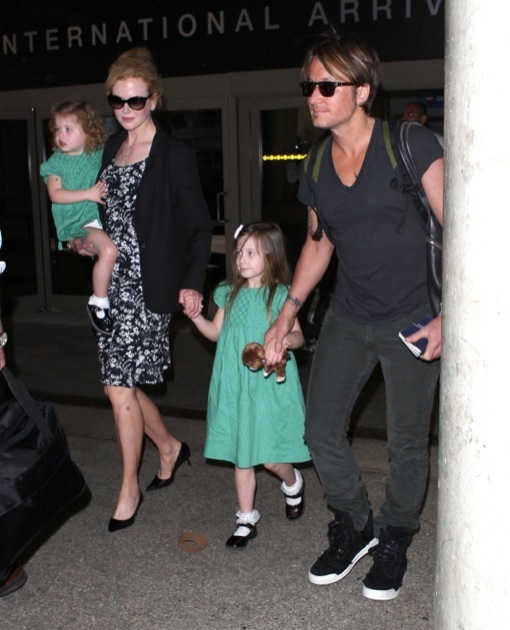 The Before I Go to Sleep actress donned a floral dress and black blazer while carrying the two-year-old. Urban dressed casually in a black top and jeans as he held the 5-year-old’s hand.

The family were arriving from Sydney, Australia where they spent Christmas and the New year.

Kidman recently opened up about her next filming project.

“I’m going to play Gertrude Bell, in Queen of the Desert with Werner Herzog. It is a huge endeavour, so I’m in the midst of researching her right now. I was with Herzog this morning. I’m very glad to be heading off to the desert with him to play her. I’m completely enraptured with her right now,” she told the Guardian. “I’ll be taking my little girls as part of their education. So we’ll take lots of sunblock and give them a chance to experience different cultures. In years to come they’ll be able to say: “When I was three, I was in the desert with my mother.” When I explained that they’ll be riding camels and living in tents, their eyes lit up.”

Meanwhile, American Idol in which Urban acts as judge on is scheduled premiere Wed., Jan. 15 and Thurs., Jan. 16 at 8/7c on Fox.